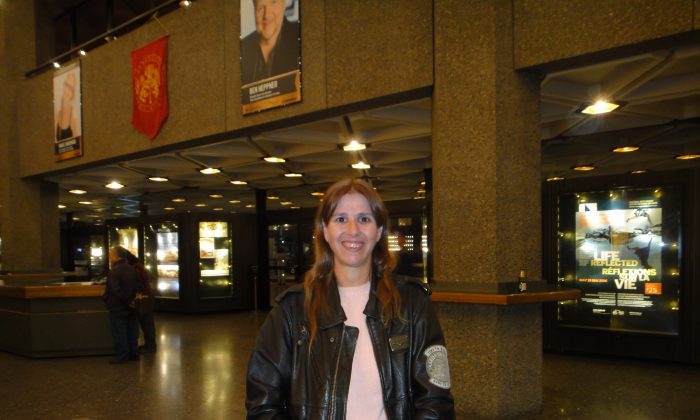 The Shen Yun performance at the National Arts Centre in Ottawa on the evening of May 8, 2016, left Nathalie Martel feeling uplifted and positive about life. (Dongyu Teng/Epoch Times)
Canada

OTTAWA, Canada—Shen Yun Performance Arts left Nathalie Martel feeling uplifted with much hope and peace for the future after attending the National Arts Centre showing in Ottawa on the evening of May 8.

“Inspirational!” she said of the show.

“The pageantry was beautiful, just overwhelming, but joyful [and] lifts up my spirit. The negativity that I felt—positive now.”

New York-based Shen Yun Performing Arts takes legends and characters from China’s 5,000-year-old history and brings them to life onstage through classical Chinese dance and live orchestral music. The group’s mission is to revive the ancient divinely inspired culture—the heart of which was gutted by the current communist regime through various destructive campaigns such as the Cultural Revolution.

Research associate Maikol Diasparra, originally from Venezuela, said the performance moved her so much she shed tears.

“I really liked the show. Actually I was crying because it was so touching, because in my country right now we have a communist government,” she said.

“There were moments that were funny, and also there’s a message in every story, and you feel it and it touches you,” said Ms. Martel, a stay-at-home mom.

She said she felt a sense of hope from seeing the show.

“It does make you see that there is hope. There is a light at the end of the tunnel. Not to give up and to believe that things can be positive, and if we stand together, peace and love will conquer,” she said.

“I think it also makes you believe in yourself because if you watch carefully all the stories—what I’ve learned is we are all somebody, we all have feelings.” She said that all the mysteries of humanity are there for us learn.

Ms. Martel said she will spread the word among friends and family about the show.

“I hope to be able to bring my sons and my friends. I’m going to spread the word because this is something to see. It’s spectacular, the performers were amazing, and to see them up there—you can see they were having a good time. They were enjoying what they were doing. That says it all.”

“Very uplifted, very nice. I’m just very impressed at the whole presentation of the performance. They’re all excellent,” he said.

“The dancers were terrific and the choreography and the costumes were just incredible. Very much enjoyed it.”

“I really liked the spiritual aspects,” said his wife, Hélène Goulet, a professional development coach at Satnam Coaching. She was formerly a senior public servant in the federal government for 25 years, working in various positions including a stint as Secretary General of the Canadian Human Rights Commission.

“The dancers were fabulous,” Ms. Goulet said. “You could see that they came from the classical Chinese dancing.”

She praised their classical training including their performance of some very difficult techniques. As explained on the Shen Yun website and by the shows two emcees, alongside ballet, classical Chinese dance is one of the most comprehensive dance systems in the world, and a lot of acrobatics and gymnastics actually original from it.

Mario Safar and his wife, Jessie, saw Shen Yun for the first time that evening and were impressed with the depth of traditional Chinese culture and how it was portrayed through dance.

“I think it’s about finding inner peace and it’s about having beliefs that are rooted, and how deeply rooted [the culture] was over the centuries,” said Mr. Safar, an engineer at Schindler Elevators.

“We’re learning about the Chinese culture through dance, which is completely different. So it’s not just about reading [about it]—now you’re seeing it in front of you and it’s very colourful, very beautiful. Very elegant too.”

“It’s totally zen, it transforms to another world of relaxation,” said Mrs. Safar. “It is definitely spiritual, and you learn quite a bit.”