'It's elegant. It's beautiful.' 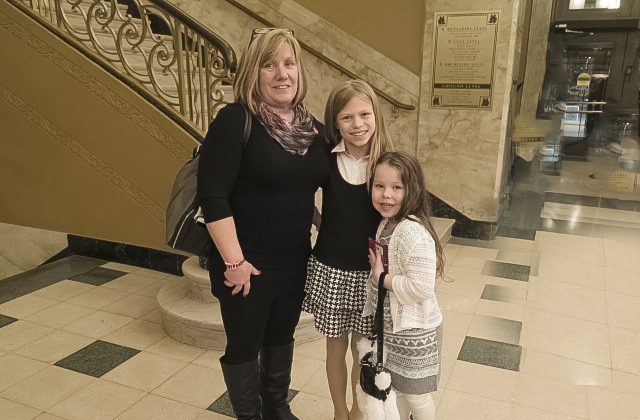 Ms. Tammy Bell brought a group of 12 including Makayla and Peyton from her dance center to see Shen Yun dance company at the Peabody Opera House on Feb. 12 in St. Louis, Mo. (Cat Rooney/Epoch Times)

“We brought some girls from the dance center tonight to see it because it’s a different culture. A total of 12 dance students with mothers came to the Shen Yun performance at the Peabody Opera House, on Feb. 12.

Ms. Bell has 38 years of experience in the dance field, according to the center website. She describes her dance center as teaching “tap, ballet, jazz, lyrical, tumbling, cheer, and hip-hop, a little bit of everything.”

Seeing a Shen Yun performance is a must for anyone loving the art of dance. And, the dance is classical Chinese dance, a distinct dance system perfected over thousands of years.

“Classical Chinese dance has its own set of training methods in basic skills, and has strict training in both physical expression and specific postures,” states the Shen Yun website. “It also involves learning combinations of leaps, turns, flips, spins, and other aerial and tumbling techniques.”

“We’re big into tumbling, so to see them do flips and different turns—and just the costuming—is beautiful,” Ms. Bell said.

The costuming was another aspect of the dance performance that not only caught Ms. Bell eye but also her emotions. “They’re bright. They’re fun. They do such different things with [the costumes] that you normally don’t see,” said Ms. Bell.

She was captivated by Shen Yun’s use of lots of ribbons and long sleeves that are integrated into the choreography. “It’s just beautiful the way they can do that, and move on and off stage so elegant. It’s elegant. It’s beautiful,” said Ms. Bell.

The whole [performance] is just inspiring. We go to a lot of musicals and such, but this is just a whole different package.”

Ms. Bell concluded with this message to the Shen Yun performers: “You are awesome, just awesome! It’s the only word I can say. Beautifully done.”

Bobby and Jackie Brancato attended the same performance as the dance studio group and found they had never seen anything like the Shen Yun performance before. “So, it’s just really cool to be immersed in the culture and to experience something I haven’t seen before,” said Ms. Brancato.

Shen Yun’s mission is to bring to life 5,000 years of divinely inspired civilization, a culture almost completely destroyed by the communist regime and its Cultural Revolution of the 1960s and ’70s.

“It’s very beautiful, actually. Really excited to see how much culture they brought to it,” said Mr. Brancato, who works for a logistics firm.

Ms. Brancato was so excited to be at the performance. “I love it,” she said. “The colors, the movement, I’ve never seen anything like this.”

“It certainly hits the heart,” she said and then jokingly said “somewhere.”

Her husband agreed. “It really tugs at the heart strings,” he said about what is happening in China including the banning of traditional culture and the persecution of a mediation group. He thought that maybe we take our freedom here a little bit for granted.

The Brancatos also wanted to thank the performers. Ms. Brancato said, “It really is beautiful, and we really do appreciate everything they do up there.” Her husband responded with: “Thank you, thank you very much. It truly is a beauty to see.”