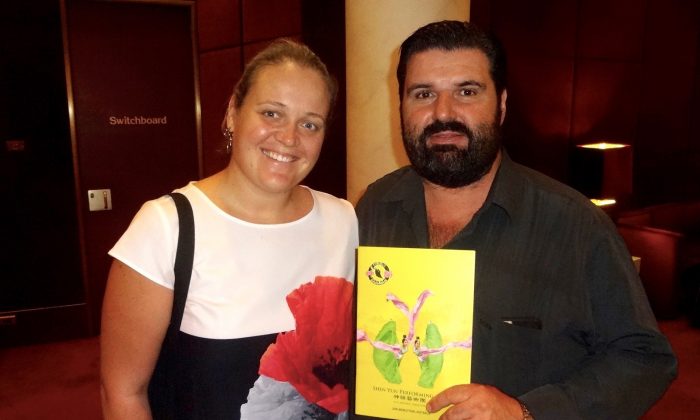 Insurance investigator, Danny Cetincic and his wife are inspired by the beauty of Shen Yun at the Arts Centre Melbourne, State Theatre, on Feb. 24, 2016. (Bowen Xiao/Epoch Times)

MELBOURNE, Australia—Shen Yun Performing Arts carries audiences on a journey through 5000 years of Chinese civilisation, depicting heavenly realms, ancient legends and modern heroic tales. Danny Cetincic felt inspired by the performances and was highly impressed by the visual aspects and professionalism of the dancers.

“It was amazing, I couldn’t believe all the moves they made and how much work goes into practicing and remembering those moves. The colour, that was very vivid, it sticks in my mind how colourful it was, just a whole spectacular performance really,” he said.

Mr. Cetincic, an insurance investigator, attended the final performance of Shen Yun with his wife at the Arts Centre Melbourne, State Theatre, on Feb. 24.

However, since the Cultural Revolution the Chinese government has suppressed freedom of belief and traditional culture. Shen Yun’s mission is to revive this lost traditional Chinese culture.

Mr. Cetincic strongly agreed with their mission, and applauded the effort they put into it, “it’s excellent— it’s been very good.”

Furthermore, he was drawn by the storytelling of Shen Yun, which combined both ancient and modern day pieces. He was deeply touched by the pieces that told current events in china and it made him realise how lucky he was to have freedom of belief.

“Particularly the modern day China one, when they had the family who were being persecuted that … got saved in the end, righteousness won out in the end, that was good for me,” he said. “It … shows you what kind of struggles may go on in China today, so it shows how lucky we are here I guess.”

When Mr. Cetincic found out that Shen Yun could not be performed in China he was flabbergasted, “my wife and I looked at each other when the narrator said that … it’s sad really.”

Mr. Cetincic learnt through Shen Yun performers that traditional Chinese culture was actually based on divinity. In particular, he stressed the importance of venerating ones heritage and beliefs.

“They pay a lot of homage to their past, their spiritual past and family is important, the right way of doing things. I think they are very righteous people. It shows in the performance, that they’re perfectionists. Spirituality … certainly makes them focused I think.”