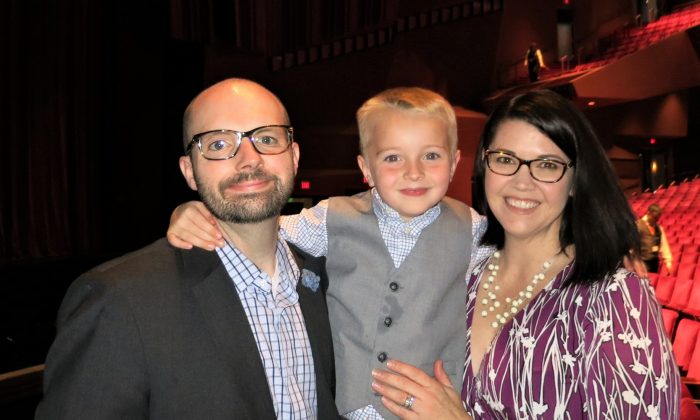 Danny Craig, director of public relations at Stantec, and his family enjoyed the Shen Yun matinee performance at Segerstrom Center for the Arts in Costa Mesa, Calif., on April 8, 2018. (Michael Ye/The Epoch Times)

“It was a fascinating glimpse into a culture and a history that we frankly don’t get a lot of exposure to here in the USA. It is fun to have my seven-year-old son here to hear music he normally doesn’t hear in school, and to see a form of dance that we are not accustomed to, so I thought it was very powerful in that regard.”

“[It’s] incredibly educational, and in a very accessible way. Even in the narration of the different performances, they made sure that as an audience every one of the performances had a very salient message and a very simple message. They focused on a particular theme or instrument, and every time you walked away with a powerful but simple impression.”

“It is interesting to see that we both embrace the same type of talent between the traditional Chinese vocals and the US based vocals but its just a different language, even if we did not have the subtitles, I think it is still something you could appreciate because you could feel what they were singing about.”

“I think no matter what faith you abide by, I think there is a lot of correlation in what kind of dedication people put into their faith and their belief system, and in some cases their resilience in their faith.”

“The entire production was energetic, sincere, and very heartfelt in telling a history and a journey of an entire culture.”