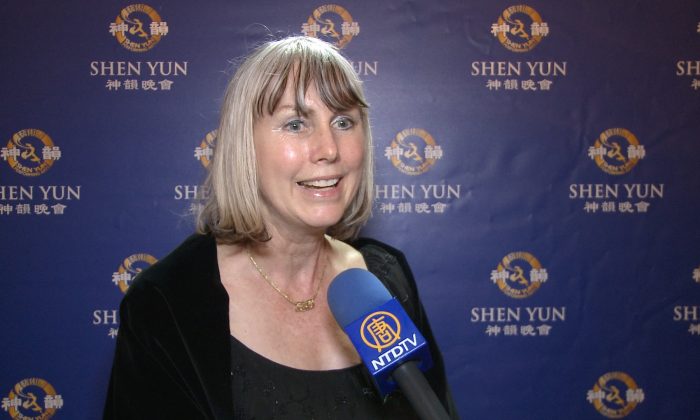 “I loved the costumes! The costumes are incredible,” said fashion designer Cynthia Ewers.

“The colors, the different materials used, the way that they flow when the dancers move, all the embellishments—it’s just wonderful!” she said.

The traditional dance, Sleeves of Grace, caught Ms. Ewers attention. Water sleeves are used in a dance to accentuate the mood of the dancer.

“The movements were just so beautiful.”
— Ms. Ewers

“The one with the flutter sleeves, where they turned into [something] like scarves—the movements were just so beautiful,” she said.

Ms. Ewers lives in San Francisco, which has a substantial Asian population.

“What’s been so wonderful, too, is all the different aspects of the culture that have been brought to the forefront. Like the different beliefs in religion, their beliefs in compassion, and helping other people,” she said.

“I’ve always found Chinese culture to be very mysterious. Between the religious aspect and their medicinal approach with herbs—when you go to Chinatown, you’re pushed into a different world,” she added.

The Shen Yun website states, “Chinese culture is thus known as ‘divinely inspired,’ and is the only culture in the world to have a continuous recorded history of 5,000 years.”

“We’re able to see a show that isn’t shown in China because of suppression, and I just feel so happy that we’ve had the opportunity to come to the show,” Ms. Ewers said.

The Shen Yun website explains: “‘Why can’t a Chinese cultural show be seen in its homeland?’ The explanation dates back to the Cultural Revolution and systematic attempts to wipe out the heritage of 5,000 years of civilization.”

“The whole show has been so upbeat and colorful. I’ve just been on the edge of my seat!” said Ms. Ewers.