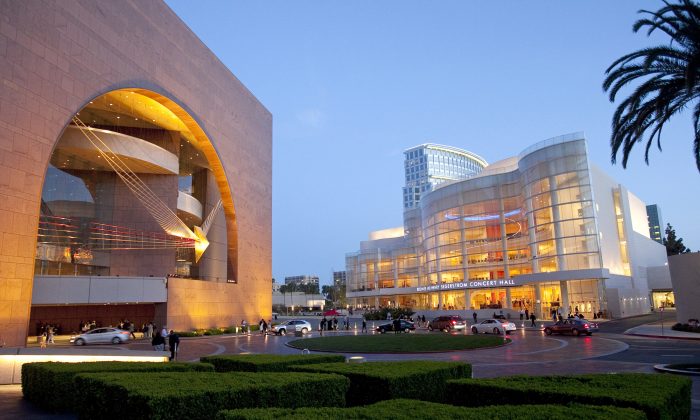 “It’s like watching the highlights from all the Broadway shows, but we have every number being a highlight,” said Mr. Ferzacca of the performance. “We don’t have to wait for the talking to get to the good dances, it’s all one impressive number after another.”

Mr. Ferzacca has taught theater and directed at Orange Coast College for more than 30 years, and is a published playwright and screenwriter.

“It’s a great way to look at the history of a country by being entertained,” he said. “And the costumes and the precision of the dances is outstanding.”

The dance was particularly endearing to Ms. Pierce, who has a background as a dancer.

“I love the architecture of the dance, I love at the end when everything ends and there’s sort of this composition of different heights and levels, it’s just really stunning the way that the Chinese dances are put together,” she said. “There’s a certain beauty in just the structure of it all.”

Backing up each dance piece is the Shen Yun Orchestra, which combines both Eastern and Western instrumentation.

“The other thing that they do well is to combine the very Western sound with the Eastern sound,” said Mr. Ferzacca.

His sister agreed: “I’m impressed with the live orchestra, the precision of the orchestra with the dance is really impressive,” she said.

Further adding to each dance are the unique costumes, which appealed to Ms. Pierce. “They’re just stunning, stunning,” she said.

The animated digital backdrop is another element making the Shen Yun performance unique. The Shen Yun website explains: “With state-of-the-art graphics technology, Shen Yun’s digital-backdrop team creates vividly animated settings, extending the stage and transporting the audience to a world where heaven and earth are one.”

“That they become alive with real people, we see the figures approaching and leaving, and then they’re on stage,” said Mr. Ferzacca of the different effects he saw used in the performance utilizing the backdrop.

“It’s very impressive all around,” he said.