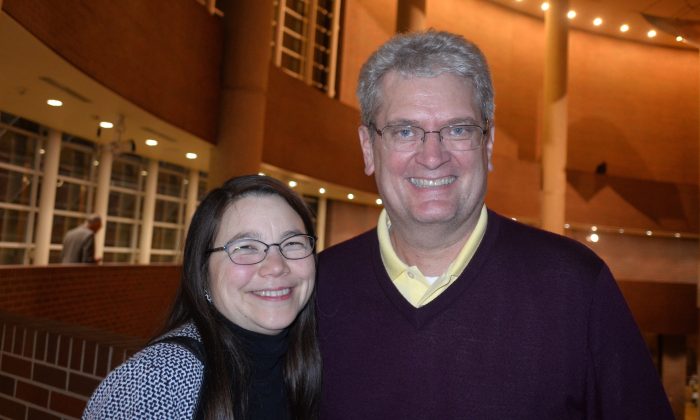 Rob and Tracy Prescott truly enjoyed the beauty of Shen Yun. The couple saw the performance at the Peoria Civic Center on the evening of March 14, 2015. (Helen Peng/Epoch Times)

PEORIA, Ill.—”I was so moved, I was moved to tears a couple times,” said Professor Rob Prescott of Bradley University, after watching Shen Yun Performing Arts Touring Company’s display of 5,000 years of traditional Chinese culture on the stage of the Peoria Civic Center on the evening of March 14.

Rob Prescott is an English professor at the local university. He attended the performance with his wife and middle school history teacher, Tracy Prescott.

Shen Yun is New York-based dance and music company that has set out to revive traditional Chinese culture through story-based Chinese classical dance. The dances are accompanied by a full-orchestra featuring sounds of the East and West.

A Shen Yun program is comprised of about 20 vignettes that capture the essence of traditional culture throughout China’s 5,000 year history by retelling stories from China’s rich history, mythology, and literature.

“There is always a wonderful story. You could always follow the story,” stated Professor Prescott. But what really stood out for him was the subtle beauty of the dancers’ movements coupled with their precise timing and agility.

Professor Prescott explained that it wasn’t just the story being told that was so moving, but rather the beauty that was shown in its depiction. “It was just the beauty of the movement. I was really moved just by the movement. But I kind of think of them in terms of the colors, as the way I remember the pieces,” he said.

He particularly felt the power in one of the vignettes about modern China entitled The Power of Compassion in which a police officer is injured carrying out the communist regime’s mandate to arrest practitioners of Falun Dafa, but is eventually touched by the compassion and kindness of the very practitioners he was trying to arrest.

Falun Dafa (also known as Falun Gong) is a peaceful meditation practice of mind-body-spirit that has been brutally persecuted by the communist regime since 1999.

“When you see the power of the healing,” Professor Prescott said. “They are coming back to heal the person who is violent to them, and he doesn’t want their help … he gives in to compassion, and I thought it was very beautiful.”

Mrs. Prescott felt the same way. She very much enjoyed it and wished her students could have been there. She said that it’s  “very rich, very rich, both for the eyes, for the beauty of the music, and for learning about other cultures, which I think is so tremendously important in our world.”

“I love it. It is very spectacular, and it made me want to learn more about the traditional Chinese culture,” she added.

As an opera fan, Professor Prescott was fascinated by the solo baritone vocalist and his ability to combine the inflections of the Chinese language with the bel canto style of singing. “The blend of the East and West, it was just beautiful,” he said.

Chris Hummel, a medical device salesman, who attended with his 6- and 10-year-old daughters was struck by how it made him reflect. “It’s just been a tremendous first half of a great show tonight.”

Mr. Hummel commented, “There’s certain injustice out there, there’s violation of human rights, and the freedom we would all want to have to pray, or to worship, to meditate, and it’s done a great job to show how we can handle these conflicts with compassion, and in a sense of peace.”

“We loved it,” Mr. Hummel said. “I love having them (his daughters) see something so different, with a message behind it that makes them think, and it’s a beautiful show. It does offer a sense of peace, and you can sense as an adult, some of the injustice in there.”

Reflecting on what he saw, Mr. Hummel was also mesmerized by it: “I’m almost at loss-for-words for it. … It’s been a beautiful display. We have seen nothing like that ever before.”

Mr. Hummel also commented about how wonderful and beautiful the solo vocalists were: “The last gentleman with the deep baritone voice was great. My 6-year-old was asking me: ‘What are the words on the screen?’ They are definitely intrigued. You wouldn’t think so at such a young age. I would say children should come to this, too.”