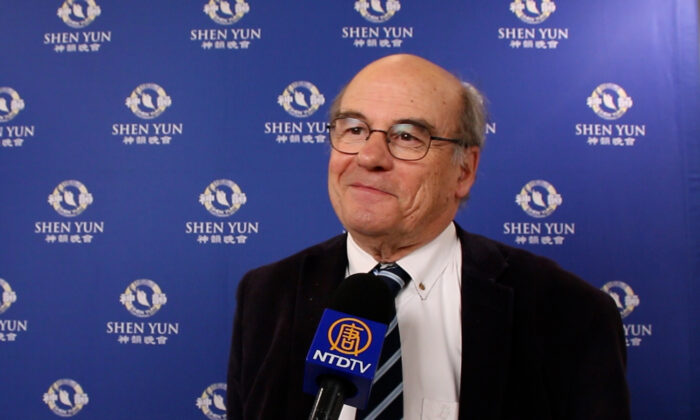 PARIS, France—Charles Bernard, president of RCF radio, said that people should not be overly worried about the pandemic and instead attend a Shen Yun performance which he described as exceptional.

“I think that the COVID crisis must be put aside, we must continue to live and Shen Yun is quite exceptional, we must take advantage of it, come to see it, whatever the crisis,” Bernard said after Friday’s performance in the French capital.

He added that as a Christian, the spiritual side of New York-based Shen Yun resonated with him.

“I noticed that there were quite a few spiritual connotations in the dances and in the texts that are written behind the dances, that’s what touches me particularly because I myself am president of a French-speaking Christian radio,” he said.

Shen Yun is dedicated to presenting China before communism. In the dynasties of China, each dynasty had its own culture, attire, and law but principles such as loyalty and filial piety were continuous throughout the ages.

“I think it’s a great show, magnificent,” he added.

He also shared his impression of the performance’s use of a massive digital backdrop.

“The sets are extraordinary and there are little extras that I find exceptional, in particular the back of the stage where you see the characters on a screen and who appear, all of a sudden, on the stage, it’s an entertaining and interesting use of technology,” Bernard said.

Shen Yun’s backdrop technology is patented and it gives the audience the impression that characters are able to fly high into the sky or dive deep into the sea.