Shen Yun Is Food for the Soul, Says Fashion Designer 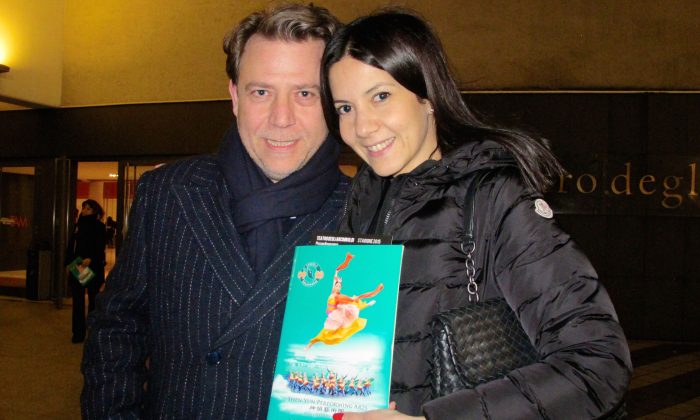 Zoi Kyriakakou (R), a fashion designer and consultant, and her companion pose for a photo at Arcimboldi Theatre of Milano on March 20, 2015. (Mary Mann / Epoch Times)

“This one was really food for my soul,” Ms. Kyriakakou said.

Based in New York, Shen Yun travels the world each year with its line up of classical Chinese dance and music to revive China’s divinely inspired culture. Exhilarating dance performances, soothing music performed by the Shen Yun Orchestra accompanying the dances, hundreds of beautiful costumes, and delicately designed projected backdrops take audiences on a journey through China’s ancient history all the way to the present.

“When the curtains opened, it was like in one second—just the colours, and the harmony—the combination of very strong colors coming together,” she continued, “it was the combination of everything that made a person feel very relaxed.”

“I feel very relaxed, and this is very important for me because I haven’t felt like this in a very long time.”

Andrea Biondi, president of the Crocera Stadium and director of a sports association, said he greatly enjoyed Shen Yun.

“It is absolutely beautiful and fantastic,” Mr. Biondi said. “The costumes and the dances are just amazing.”

Gigliola Piciocchi, a PR consultant, said she felt like she took a trip to China while watching Shen Yun.

Taking inspiration from traditional Chinese culture she saw in the performance, Ms. Piciocchi said “we should have more emphasis on meditation in our Western culture as well.”

“I believe we don’t take enough time to stop and think.”