Shen Yun Is ‘Food for the Soul,’ Rabbi Says 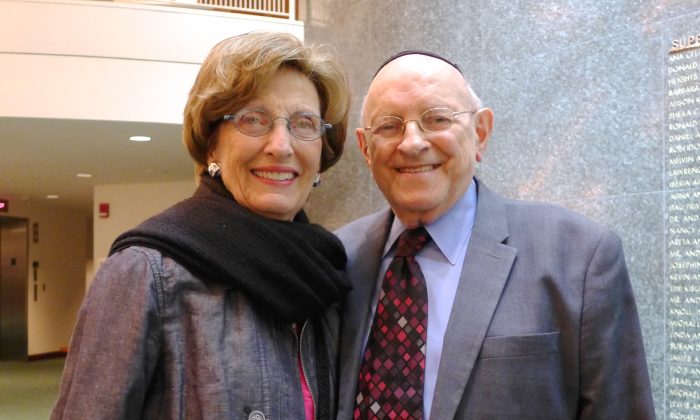 After the show, however, he and his wife, Shirley Schiff, not only felt more knowledgeable about traditional Chinese culture, but they also left the theater uplifted in spirit.

It was heavenly.
— Rabbi Solomon Schiff
“It was heavenly. It was beautiful—the scenery, the dancing, the background,” Rabbi Schiff said. “It was magnificent.”

“In less than 10 minutes each, Shen Yun dances recount ancient myths, bygone heroes, or celestial paradises. Whether set in the past or in contemporary China, every dance embodies traditional Chinese values,” the Shen Yun website states.

Mrs. Schiff, a teacher, described Shen Yun as “gentle, beautiful, soothing.” She left with the desire to return again. Rabbi Schiff said they would tell their friends to attend the following night’s performance.

“It was very spiritual,” Rabbi Schiff said. “It was food for the soul.”

He said Shen Yun’s story was beautiful, and he learned about Chinese history—the different dynasties that passed and events that occurred over the years.

He felt this show was different. “It gave us an appreciation of the Chinese people, the Chinese culture, which is very rich and very inspiring,” he said.

With the mission to revive the true, divinely inspired culture of China and share it with the world, Shen Yun Performing Arts travels six months of the year, performing in approximately 20 countries and 100 cities.

Shen Yun has drawn top talent from around the world. Many of its artists have won international competitions in dance, choreography, and music.

“It was just beautiful—the music, and the singing, and the instruments,” Mrs. Schiff said.

Every Shen Yun performance shares—through song and dance—beautiful snapshots of Chinese history, drawing inspiration from ancient classics such as the story of Li Bai, the acclaimed poet of the Tang Dynasty.

Shen Yun also tells contemporary tales of faith and courage, as well as covering themes of myths and legend.

“It feels good to see the beauty of another culture,” Rabbi Schiff said. “I’m enriched by having a new element—a beautiful culture come into my heart.”