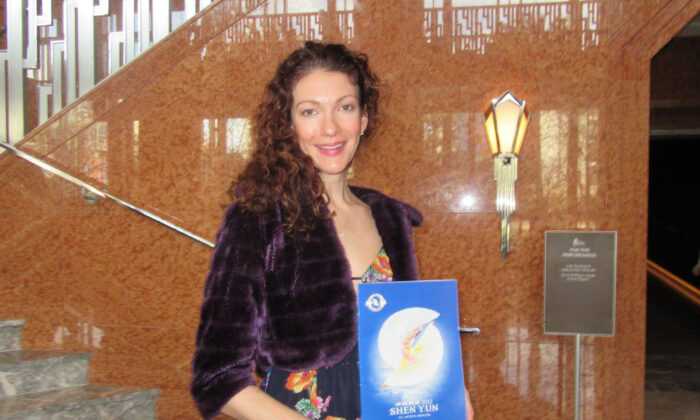 Sydney Freggiaro at the Shen Yun Performing Arts performance at The Smith Center for the Performing Arts, on Feb. 27, 2022. (Jana Li/The Epoch Times)

“They were incredible. I would say I had no idea how much conventional dance had borrowed from traditional Chinese dance so I really appreciated the history. … And I had no idea the rich history that we were borrowing from China,” Dr. Freggiaro said.

She was impressed by how much expression the dance form allowed. New York-based Shen Yun’s dancers are trained in the bearing and form of classical Chinese dance which allows for a plethora of emotions to be depicted without uttering a single word.

“It was extremely expressive. Even if I didn’t know the history, I understood the stories so it was really easy to relate to. I think they went above and beyond in doing that,” said Dr. Freggiaro.

The stories told in Shen Yun vary from tales of valiant heroes to humorous, miraculous monks. With the glory and tragedy of 5000 years to the present day, Shen Yun will never run out of stories to tell.

It was extremely powerful and moving to watch Chinese dance.
— Sydney Freggiaro

“They’re very talented. … So it was extremely powerful and moving to watch Chinese dance. And that’s them telling us this rich history, cultural history, and bringing it to the modern era. So I think it was fantastic storytelling,” Dr. Freggiaro complimented.

With the history of China comes the spiritual aspects of the nation that is deeply rooted in Chinese culture. Shen Yun strives to showcase China as it was before communism.

“I guess our impression of China right now is that it’s very closed off. So to see that these people were able to express their spirituality in a way that was not safe for them back at home is really emotional. I like cried a little bit. … So for these people to be blending spirituality and movement, continuing their cultural tradition was incredibly inspiring,” she said.

Since the pandemic began, live arts have been put to a halt. Dr. Freggiaro expressed how touched she was to see Shen Yun performing in Las Vegas.

“We’ve been shut-in. We haven’t been able to see people expressing movement for two years. When the curtain rose, I cried a little because we’ve been locked into what’s right in front of us and so to have the world come to you, and the tradition, the story, that was really empowering,” she said.

Shen Yun puts on an all-new production every year. Dr. Freggiaro expressed that she would love to be able to talk to Shen Yun’s choreographers.

If she had a chance to speak with the artists of Shen Yun, she would say, “Keep doing what you’re doing. [You’re] serving the community. [You’re] serving every town by showing a rich traditional culture, by empowering and educating people about dance. Don’t stop, please don’t stop. And I mean, look how many people are here. People from all walks of life—all ages are here to see this.”