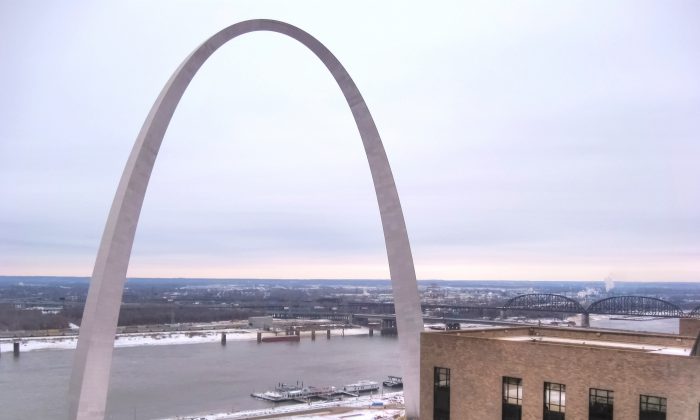 ST. LOUIS—Shen Yun Performing Arts and St. Louis’s landmark 630-foot stainless steel Gateway Arch have a common thread; they both are a celebration of heritage. The arch honors the early American settlers. Shen Yun brings to life an ancient and divinely inspired civilization that comes from the land of China.

“Through the universal language of music and dance, Shen Yun weaves a wondrous tapestry of heavenly realms, ancient legends, and modern heroic tales, taking you on a journey through 5,000 years of Chinese culture,” Shen Yun’s website states.

Audience members resonated with Shen Yun’s mission to revitalize traditional Chinese culture through storytelling dance and music at the first of four performances at the Peabody Opera House on Feb. 20.

“I love the fact that Shen Yun is trying to bring cultural awareness to the whole entire country,” she said. “I am … fascinated with the Asian culture, so I’m thrilled to pieces.”

“It is ethereal,” is how her aunt, Joan Metro, would describe Shen Yun to her friends and family she would recommend come to the performance. “I loved the synchronization of [the dancers]; the unity that it brings out is really beautiful.”

Niece and aunt were celebrating Ms. Metro’s 83 birthday.” She is just the most amazing woman I know,” said Ms. Dmytrack about her aunt who she introduced as a former nun and missionary who assisted in building the first school in Africa for girls, and who became an educator and high school principle in the States.

Everybody needs to come and see [Shen Yun],” concluded Ms. Dmytrack. “It is absolutely fabulous.”

Cynde Meyer and Patrica Savant valued the restoration of the traditional culture from a modern day perspective.

It “just opened my heart. You could just feel all the love, and how kindness and compassion are really at the root of everything they are trying to teach us,” said Ms. Meyer, the publisher of Spirit Seeker magazine for 18 years.

Both women were very aware the oppression in China of a traditional meditation disciple known as Falun Dafa or Falun Gong. It is depicted in two mini-dance stories.

“Sad for China, that is how [the performance] makes me feel, sad for China,” said Ms. Savant. “I saw a documentary on Falun Gong and how they are persecuted in China. It was pretty horrible.” She felt that the performance is away to keep themselves alive.”

Gail Lemay, retired from educational curriculum sales, and Mimi Ziegler, a retired elementary art teacher, found an educational component to their mission that can be appreciated by everyone.

“The show just brought out to me the artistry at so many levels-with the costuming, backdrops, music, dance, and singing. I mean, it just went on and on, and I’m sure there are many more layers underneath that. A phenomenal performance,” explains Ms. Lemay.

“All cultures are very important for us to know and to respect,” she said.

“It is sad that they can’t even perform this in their own country, so I think we should rejoice in having them,” said Ms. Lemay.

Ms. Lemay said, Shen Yun “shows the beauty that man has the capability of creating. Yet it seems when we look in the newspapers there’s not any beauty to be seen at all. It’s all hate and war, and anger, power and greed; and, yet on the stage the curtain lifts and there is this incredible beauty just sitting and waiting to perform, to go into action. That’s the kind of action we need is the beauty of connecting with other people.”

For Ms. Ziegler, the performance made her feel “hopeful, there is going to be a good ending somewhere. You need to go see it!”

“[Shen Yun] made me feel like spring is coming. Our winter is dire right now and it really gave a feeling of hope and renewal,” said Ms. Lemay.

“I would recommend it highly to anyone. It shows their struggle, but they are not giving up. Then they come out in even brighter and more beautiful costumes and dance and have hope,” said Ms. Ziegler.

Ms. Lemay recommended Shen Yun as a “wonderful family performance; there are so few things that are educational, beautiful, entertaining [and] memorable that a family can enjoy. This is certainly at the top.”