Shen Yun Is Diverse, Divine, and a Living History 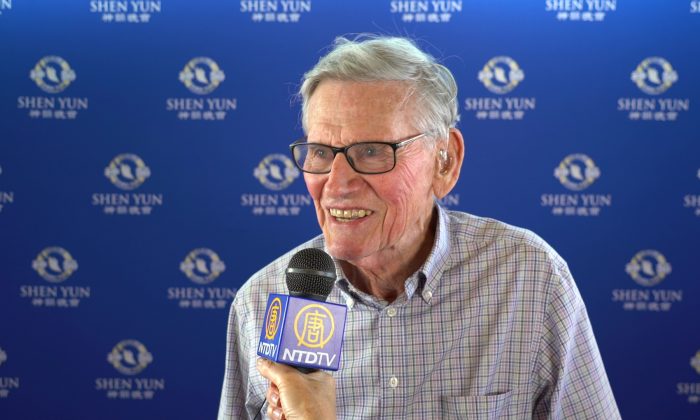 “They just didn’t miss a thing. I thought someone is going to make a mistake but they didn’t. How can they do all that?” he said. “They are very well rehearsed, absolutely beautiful, and synchronized.”

Having previously visited Mainland China back in the 1980s, Druitt is very aware of the Chinese regime’s persecution of different spiritual practices and pleasantly surprised to see freedom of belief included in Shen Yun performances.

“I did not expect that,” he said. “We know from our Christian background and interests those sorts of situations [exist].”

He was very impressed by the combination of 3-D animated backgrounds and dance movements to add an extra dimension to stories.

“How they synchronized that it’s just, apart from ongoing musicals, I have never seen anything like that,” Druitt said. “It was just amazing, absolutely amazing.”

Australian stand-up comedian Maria Herman felt as though Shen Yun transported her to another world with its color and music.

“It’s like being transported somewhere else. It’s phenomenal, I’m loving it … I mean it’s so fluid and colorful and the men and the women [on stage] are just amazing,” she said. “They are acrobats and performers and dancers and actors and actresses, they are everything together. It’s really a spectacular.”

Herman, who usually lives in the United States, recently visited Mainland China for three weeks but found nothing in theaters that compared to Shen Yun—which is based in New York.

“I felt like I kind of went to a live movie because with the action going on in the background, with the screen coming to life in all that digital imagery kind of melding together with the live performance, it just really felt like something new,” she said. “Like a completely new kind of performance without a static background, something that the two gel together was fantastic, I’ve never seen that before, I loved it, I really loved it.”

She also believes Shen Yun’s live orchestra plays better music than anything she heard during her visit to China, and decided to buy the official soundtrack CD after learning they are for sale.

“It was very soothing,” Herman said. “The music that I heard in China that was traditional wasn’t [very appealing] to me, I mean it was awakening and this feels a lot more soothing to me … if you had a CD I’d probably buy one.”

“The dancing was breathtaking, just wonderful, I loved it,” she said. “I knew there would be a lot of color and the costumes, [but] I really didn’t know it was going to be so outstanding and so emotional.”

Surgical patient care assistant Brine Maley found the performances to be very ethnically diverse, which many audience members don’t think of when they think of China.

“[I liked] how the performance worked systematically through their cultures, and bringing in some of the nomadic people,” she said. “I found all these ethnic groups incredible … it just gave an incredible insight into the ancient history.”

Maley could sense Shen Yun dancers’ love for the divine beauty through their high level of skill and agility.

“It gave me a sense of how that spirit moves from everybody and in every culture,” she said. “No matter how different, vastly different they dress and they appear, we are all the same.”

Theatergoer Helen Atlen Scott loves Shen Yun so much she returned to watch it for the fourth year.

“There’s no word in the English language that describes such beauty, talent, and magic,” she said. “The last episode it brought me to tears and I really honestly [hope] everyone in Australia should see this show, as well as China.”

Even though Atlen Scott had seen Shen Yun many times, she said she still felt a magical awe about the performance. She promised to return to see Shen Yun once again.

With reporting by NTD Television, Michele Webster, and Richard Szabo.