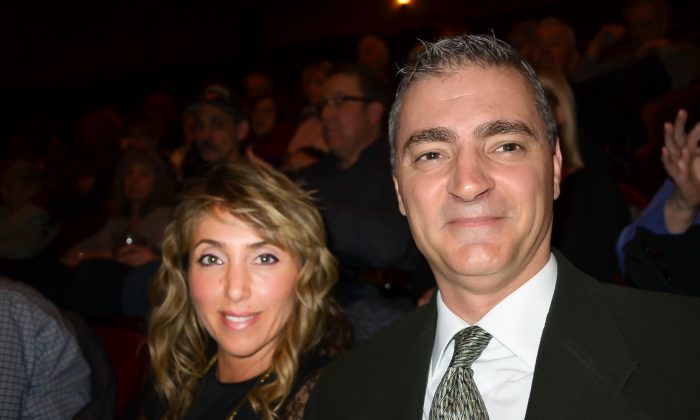 DETROIT—Shen Yun Performing Arts took J.T. Kirkpatrick’s breath away on the afternoon of March 7, 2019. He and Linda Yono enjoyed the performance of traditional Chinese music and dance, which is known to transport viewers from this world to the heavens and back again, giving a sense of the essence of China.

“The colors overall are beautiful,” said the president of a Detroit manufacturing company at intermission. “Almost a shock to your senses when the [curtain] goes up.”

Their first time seeing Shen Yun, they each mentioned a different kind of traditional dance to highlight. Ms. Yono appreciated the ethnic dance “Mongolian Spirit” for its dance movements.

In this dance, the male dancers of Shen Yun appear to be riding horses, demonstrating a culture that revolves around nature. These Asian cowboys, as traditional Mongolian people are referred to in the program book, learn to ride almost as soon as they can walk.

While Ms. Yono appreciated the dancing of the all-male piece, Mr. Kirkpatrick commented on the grace of the women in another dance: “Actually the acrobatics are wonderful, but the most intriguing part for me was the beauty of the movements of the women. … With the sleeves, they were very pretty—very interesting how they catch the sleeves inside and then throw it out.”

In the “Sleeves of the Tang Palace,” a dance set in perhaps the era that epitomized traditional Chinese culture, the Tang Dynasty, all of the women in the dance company manipulate “water sleeves,” which almost seem to dance themselves.

“With the sleeves in particular, it’s a shock when they throw them out. It’s a bit of a shock,” said Mr. Kirkpatrick and then gasped as a way to demonstrate his reaction during the performance. “A surprise. A little bit of an electric shock.”

While some of the dances are performed by either all the women or all the men of the company, others tell stories in which both genders are usually required to tell one of the countless legends or historical stories from China’s 5,000-year-old civilization.

Of these, Mr. Kirkpatrick enjoyed “The Queendom,” a story from the classic novel “Journey to the West” that revolves around the adventures of a Buddhist monk and his disciples-bodyguards: the Monkey King and Pigsy. The dance tells of the Lake of Fertility where even a sip of its water can turn anyone pregnant.

“I like the one with the monk and the monkey and … the fertile water,” Mr. Kirkpatrick said. “It’s very, very funny and the monkey’s dancing is hilarious.”

This particular scene involves a great deal of shape shifting as characters are not always as they first appear, and here the digitally animated backdrops allow all of these changes to come magically to life.

The couple also mentioned a dance that was anything but funny. “The persecution scene was touching,” Mr. Kirkpatrick said.

In presenting China’s traditional culture from its inception to modern times, Shen Yun simultaneously traces the Chinese people’s belief in deities. In modern times, with the rise of communism during World War II, this belief has been deliberately undermined.

The dance Mr. Kirkpartrick was talking about, “Goodness in the Face of Evil,” is set today and is based on actual events currently going on in China: state-sanctioned organ harvesting.

Despite this sad part of the performance, overall, the gracefulness of the movements made the performance very peaceful, very soothing, Mr. Kirkpatrick said.

With reporting by Michael Huang and Sharon Kilarski.