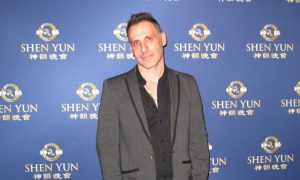 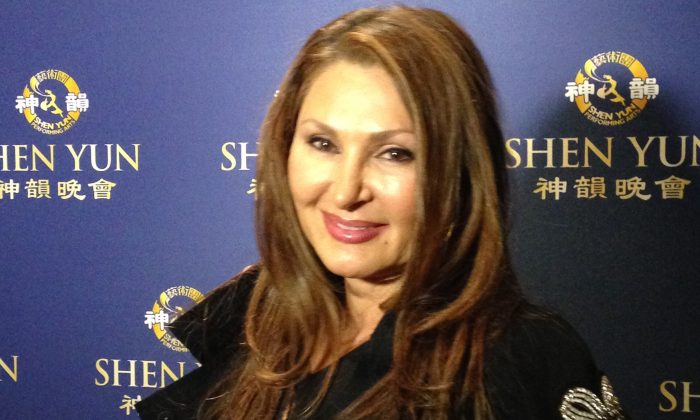 Shen Yun Is an ‘Enlightenment of Beauty’

Ms. Llovio, a singer and actress who appeared in short films and infomercials in the Spanish-language productions, said she enjoyed the Shen Yun performance so much that “I’d like to find more touching words to explain how beautiful it was. I love your culture. I have not had the honor to visit your country as of yet.”

“Today was very educational. It was full of richness, of knowledge, and beauty, and messages of love and peace, and I was totally blown away,” sha said. “I will come back. I will see it again and again, and highly recommend it.”

It was not surprising that Ms. Llovio, as a singer, was captivated by Shen Yun’s heavenly music. “I like what they said about music being medicine, and I believe it is, because when you hear it, you feel a soothing feeling in your heart, in your mind. So yes, it is true that it resonates through our bodies and our souls,” she said.

“Whatever feelings of sadness or uncertainty I was feeling when I got to the show, it went away. I feel a lot of peace and a lot of love. I just had a friend of mine who passed away last week, so tomorrow I have to attend her funeral, but this was so soothing and so emotionally healing, it reinforced what music does for you,” she said. “It was an amazing experience.”

The Shen Yun website explains about the performance’s music: “The Shen Yun Orchestra combines the spirit, beauty, and distinctiveness of Chinese music with the precision, power, and grandeur of the Western symphony orchestra. The result—two great traditions producing one refreshing sound.”

“For 5,000 years divine culture flourished in the land of China. Humanity’s treasure was nearly lost, but through breathtaking music and dance, Shen Yun is bringing back this glorious culture,” explains the Shen Yun website. “A Shen Yun performance features the world’s foremost classically trained dancers, a unique orchestra blending East and West, and dazzling animated backdrops—together creating one spectacular performance.”

Ms. Llovio was enthralled by all aspects of Shen Yun. She said that the performance was impeccable, and “it wrapped me around so well that everything to me was beauty on every level.”

Watching Shen Yun, Ms. Llovio felt strongly connected with the performance. “The messages were amazing. The messages of teaching everyone that there is equality, that we should all believe in freedom, that we should all be free to love and to express ourselves,” she said, “and the compassion and meditation scene had the most amazing message that I think anyone from any country can feel it and understand it.”

Ms. Llovio was referring to The Power of Compassion dance piece in which a group of Falun Dafa meditators was attacked by Communist Party policemen. While trying to arrest a young man, a police officer falls and hurts his knee. Rather than fleeing, the young man helps the resistant officer.

While people in other parts of the world freely practice Falun Dafa, a spiritual meditation discipline, Falun Dafa practitioners in China still suffer from an ongoing persecution.

To sum it up, Ms. Llovio said Shen Yun is “an enlightenment of beauty.”

After the interview had concluded, Ms. Llovio returned to tell the reporter: “I had to add a little more to this. The educational and the cultural level of this show is so impressive. It touched my heart,” she said.

“And I learned so much tonight, and it’s just beautiful. Just the instruments, the art form, totally impressed me and knowing that they believe that music is so healing that [it] resonates through our bodies and our soul. It touched my heart because I’m a singer,” she said.

“I think the world needs more music and they need to come to your show more. Thank you so much.”