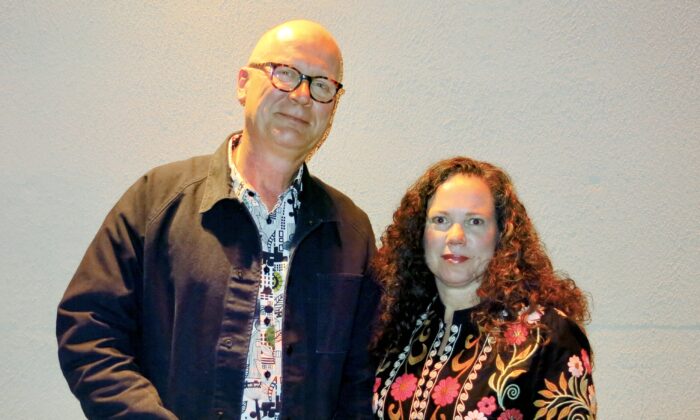 GRAND RAPIDS, Mich.—For Luke and Nicola Schulten, Shen Yun Performing Arts was an absolute joy to watch. The couple, who worked in China for 30 years in the shoe industry as designers and developers, were tantalized by the performance and particularly the footwear of the dancers.

“I’m so impressed with the costumes and the colors and the music and the drama. I just think it’s so beautiful,” said Mrs. Schulten at the DeVos Performance Hall.

Mrs. Schulten was intrigued by the dancers’ footwear.

“Very, very fluid, the way that they’re created with all the detail. The fabrics are very fluid and colorful. And then of course, when [the dancers] turn you’ve got beautiful color underneath—very, very effective.”

Shen Yun’s story-based dances are a reflection of ancient Chinese society, its arts, values, and spirituality. They also portray today’s persecution of Falun Dafa, a meditational practice, in one of the dances, “Insanity During the End of Days.”

This story piece revolves around the practice in China of killing people for their beliefs to supply organs for China’s transplantation hospitals.

Mr. Schulten spoke of what he knows about forced organ harvesting.

“I am not familiar with it but I’ve heard about it … But’s a very common problem, if you will, and people talk about it when I’m in China and work with my colleagues there,” Mr. Schulten said.

“It is mentioned very carefully, of course. But at the same time, that actually brings home the difference between the old China and let’s say …  modern China,” he said.

Shen Yun was an amazing “piece of art” he said.

“It is so fluid. You can see that it must have been an enormous amount of work to basically get to this point and make it so easy looking. The performance is smooth. And I can see there’s been a lot of training going into [the performance],” said Mr. Schulten.

“Its incredible skill and teamwork that makes something look easy and fluid … it’s incredible expertise,” she said.

Mr. Schulten said he was particularly interested in one of the vocalist performances and the lyrics of the song, which has many spiritual themes. “I thought the choice of music and the song itself was very surprising because nowadays a song like that in China you would not hear,” he said.

“America has its … religious ways of going about life, [but lyrics] like this really reach back to before the communist regime and a song like that would not be possible nowadays. From my point of view that was revealing and actually very interesting to see the connection with old China and nowadays China,” he said.

Mr. Schulten gave his perception of the effectiveness of the messages depicted in the dances.

“I think the message is very smooth. It’s not overbearing, and it is not … too strong. It’s very subtle. And it’s beautiful because it’s done in a beautiful art form,” he said.

“[It was] very obvious, but I have to say maybe for us, knowing China and the Chinese a little bit, we see the message and we understand the message,” said Mr. Schulten.