Shen Yun ‘Is Almost Like the Meaning of Life in a Big Way,’ Says CEO 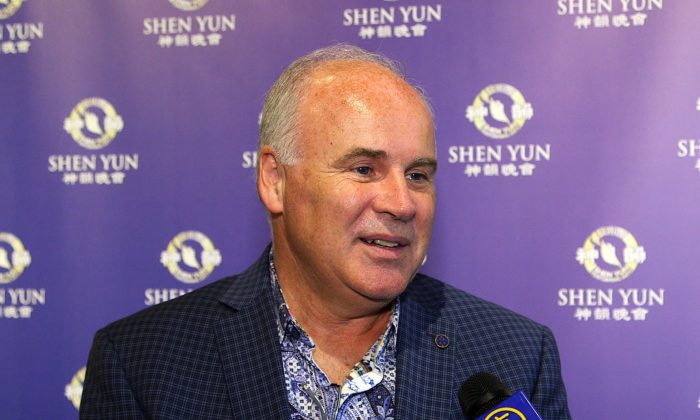 Jeff Calderwood, CEO of National Golf Course Owners Association Canada, came to see Shen Yun at the National Arts Centre on May 8, 2016, with a group of eight family members and friends. He said seeing the show was "very meaningful for our family." (NTD Television)

OTTAWA, Canada—Seeing Shen Yun Performing Arts at the National Arts Centre in Ottawa on May 8 was a moving experience on many levels for Jeff Calderwood, CEO of National Golf Course Owners Association Canada.

In an interview after the performance, Mr. Calderwood said his mother had passed away just two days previously, and he and a group of family members and friends—eight in all—came to the show to honour her through Shen Yun’s music and dance.

“This was a Mother’s Day gift, so it’s very, very relevant, my mother being a music teacher and our whole family being here to celebrate her life in a way that the message of the whole show delivers. So it is very, very meaningful for our family,” he said.

“It was a tremendous show,” said Mr. Calderwood, who comes from a musical family and plays trumpet, guitar, and piano. Music is his hobby, and he has a recording studio in his basement.

This added to his appreciation of Shen Yun, which showcases China’s ancient culture through live orchestral music and classical Chinese dance.

“I think it is a combination of the music and the theatrics, and the culture and the history, combined with the meaning of it. It’s almost like the meaning of life in a big way. … It’s very uplifting.”

You can’t help but be motivated by a show like this.
— Jeff Calderwood, CEO, National Golf Course Owners Association Canada

He said the orchestra and its blend of Chinese and Western instruments augmented the rest of the show.

“I think the music brings the whole story to life, and the combination of the traditional Chinese music and instruments, combined with a Western orchestra, just makes the whole story much more relevant to the way the whole performance is going on [on the] stage and the message the people get from it sitting in the audience.”

His daughter, Lauren Calderwood, is a lawyer by trade and also plays piano and flute. She said she was “incredibly impressed” with the show.

“The combination between the dancing and the performance and the orchestra is immaculate. The timing, the precision, is perfect. You can’t help but be impressed, and I think even for people who don’t have a musical background it’s so impressive and it’s so uplifting. … Honestly, it’s phenomenal.”

Having done some performance art when she was an undergraduate, Ms. Calderwood said she realizes that it isn’t easy to achieve the level of precision between the dancers and orchestra that Shen Yun does.

“It’s not easy to get the precision, to get the timing, to get the musicality of everything. It’s incredibly challenging. So many dancers, so many instruments, and one conductor who’s trying to lead the entire orchestra. So it’s hard work. It’s incredibly hard work and it takes a lot of discipline to practice and be on point throughout the entire thing. I didn’t hear any mistakes,” she said.

“It was so enjoyable and so impressive.”

‘It just brings you up in so many ways’

Through the expressive art form of classical Chinese dance, Shen Yun portrays myths and legends from ancient China along with heroic tales and characters from the Middle Kingdom’s long and rich history. The spirituality inherent in the culture that originated from Confucianism, Buddhism, and Taoism also comes through in the show.

“You can’t help but be motivated by a show like this,” said Mr. Calderwood.

“It just brings you up in so many ways, and in terms of the meaning of life, I think it is just a great reminder of the things that are important in life and it just gets you past some of the superficial things in our Western culture that we think about so often most days. This goes beyond that and that’s a great reminder of the big picture of how the whole world fits together.”

For Ms. Calderwood, the history threaded through the show “was probably the part.”

“I kind of expected the music and some of the dance but the story, the history of China, that was woven through all of that and how the people are, just still so courageous in the face of it all. There’s so much adversity they’ve faced and there continues to be so many difficulties they deal with on a regular basis. But I liked that the story focused on the positive parts and how they’ve dealt with the adversity. I honestly found it very uplifting,” she said.

The historical parts, the cultural context—that was the biggest surprise for me.
— Lawyer and musician Lauren Calderwood

Shen Yun was formed in 2006 by a group of overseas Chinese artists who had the wish to bring about a renaissance of the age-old culture that was almost destroyed by various communist campaigns, the most notable being the Cultural Revolution.

“I feel actually pretty motivated, and I also feel inspired because a lot of what they’ve been through isn’t easy,” said Ms. Calderwood.

“[The performers] want to tell that story that is so important to them, and then we get to enjoy it and we get to learn about it from a cultural perspective which is something a lot of us here in the Western world, we don’t always understand. We know what’s on the news and everything but we don’t always know the background, we don’t always know the history of the story. Honestly, I find it really motivating and really inspiring. Look at what they’ve been through and look at how proud they are still of their culture. Nothing can hold them down.”

“The historical parts, the cultural context—that was the biggest surprise for me,” she added. “But I think that’s also what I enjoyed the most. There’s a lot to be learned there.”

Mr. Calderwood said the values portrayed in the show are very important in today’s world.

“The true values that we are all here for, and the bigger picture beyond ourselves—I think the meaning of life is one way to say it but it’s very much in your heart,” he said. “[Values such as] honesty, discipline, respect for the planet and other people as opposed to some of those Western cultures that we sometimes get a little caught up with.”

“The precision of their art is uplifting in and of itself, and the performance of it is a great representation of the whole message behind the show.”