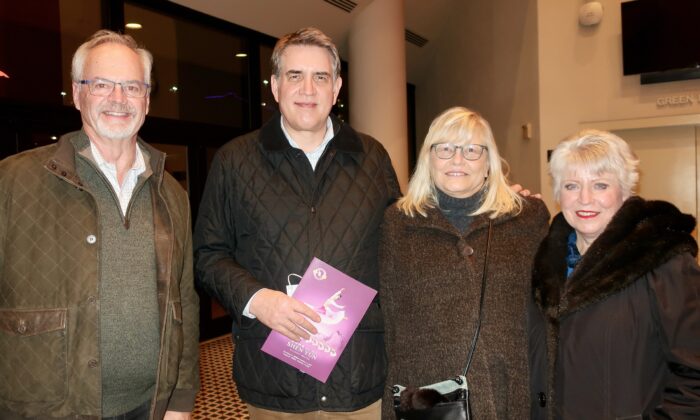 “I love the performance,” said Ms. Branstad, wife of the former ambassador to China and former Iowa governor Terry Branstad. “It was beautiful.”

New York-based Shen Yun aims to revive the 5,000 years of Chinese civilization that has been all but lost due to the communist regime in China.

Accompanying Ms. Branstad to the performance were Mr. Churchill and Bill and Lynn Frank.

As people who have lived in China, Ms. Branstad and Mr. Churchill shared their thoughts on Shen Yun‘s presentation of Chinese culture.

“It definitely portrays China before communism. … When you look at what the lyrics were for the songs and when it talks about the divinity, that’s certainly something that we wouldn’t see today,” Mr. Churchill said.

Ms. Branstad said the performance was absolutely outstanding and agreed that they would not have been able to see Shen Yun in today’s China.

She also praised the presentation of divinity and spiritual themes in the performance.

“We who definitely have faith in this country—it was very nice to see that portrayed because, like Mr. Churchill said, you did not see a lot of religion and faith [in today’s China],” Ms. Branstad said.

“I mean, everybody is ready to be finished with the pandemic. And so any chance we have to go out and be with people and see a wonderful performance, we’re anxious to get back to living life,” Ms. Branstad said.

Chinese culture is diverse in its ethnic groups and its long and deep history. Mr. Churchill expressed his appreciation of Shen Yun for portraying it so beautifully.

“I loved it. You can see the history in it and the beauty and how delicate it was, but how strong at the same time—and the colors.  It was really nothing like I ever saw in China so it was really special,” he said.

The Epoch Times is a proud sponsor of Shen Yun Performing Arts. We have covered audience reactions since Shen Yun’s inception in 2006