Shen Yun Is ‘A Very Beautiful Expression of Art’ 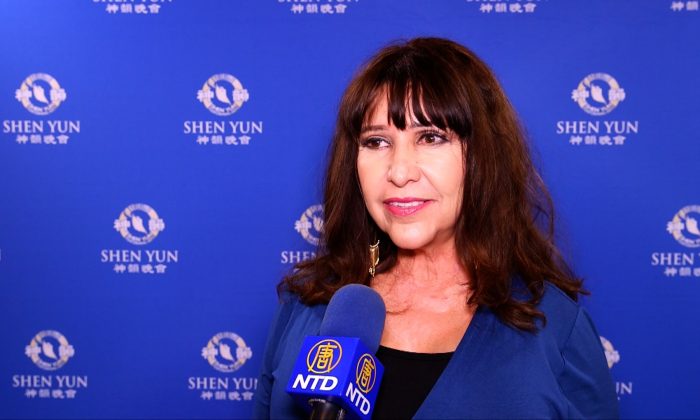 ESCONDIDO, Calif.—Victoria Harris, a real estate investor at Victory Investments in San Diego, was happy to attend Shen Yun Performing Arts for the first time at California Center for the Arts on Wednesday, Feb. 13. However, she said she was sorry she had not come earlier.

“The performance is absolutely magnificent. It is a very beautiful expression of art,” she said. “Everything is excellent, precision, perfect, beautiful.”

Shen Yun is the world’s top classical Chinese music and dance company. It was founded in 2006 in New York with the goal of reviving the 5,000 years of China’s traditional, divinely-inspired culture and sharing it across the globe.

The name Shen Yun means “the beauty of divine beings dancing,” according to the company website. The performing arts company “now has six equally large companies that tour the world simultaneously, bringing an all-new performance of dance, costumes, animated backdrops, singing, and music to over 150 theaters every year.”

Harris, whose daughter danced ballet, said she could see the “hours and hours of dedication and discipline” that the Shen Yun artists put into honing their skills and preparing for the performance, especially having a live orchestra playing along with the dancers.

“I’m totally impressed,” said Harris. “It’s absolutely one of the best performances that I have ever seen, and I have been to many, many performances.”

The real estate investor said she learned from the emcees during the performance that many modern dance forms and gymnastics have roots in the unique movements of classical Chinese dance, which are thousands of years old. The dance form is one of the most comprehensive dance systems in the world, according to the website, and it’s the main feature of a Shen Yun performance.

“It’s beautiful that they are able to execute it so perfectly. They’re very graceful,” she said of the dancers.

Harris also enjoyed Shen Yun’s mixture of traditional Western orchestral instruments with Chinese instruments, such as the pipa, erhu, and the gong. She said the orchestra’s music closely matched the theme of each dance vignette, at times becoming more intense and exuberant, while at other times becoming more relaxing and gentle.

“It’s beautiful. I had never seen, heard that before,” she said. “It has everything, to excite all the senses: the visual, the hearing.”

Shen Yun also includes musical soloists, ethnic dances, story-based dances, a variety of traditional costumes, and an interactive digital backdrop, into which dancers seem to disappear or reappear, like magic.

“The background is absolutely wonderful, the way … they incorporate the dance with the background. The colors, of course, are striking and absolutely marvelous,” she said.

While watching the performance, Harris said she felt a profound feeling, as though Shen Yun leads people to the divine and encourages respect and gratitude for what has been given to people.

“Especially the great talent that has been given to us through this art form,” she said. “It’s very inspiring.”

Overall, Harris said she appreciated the different stories within the performance, both light-hearted and serious. She could also sense a very positive energy coming from the stage.

“A very uplifting energy, very light, no darkness. Very high vibrations from the art,” she said.