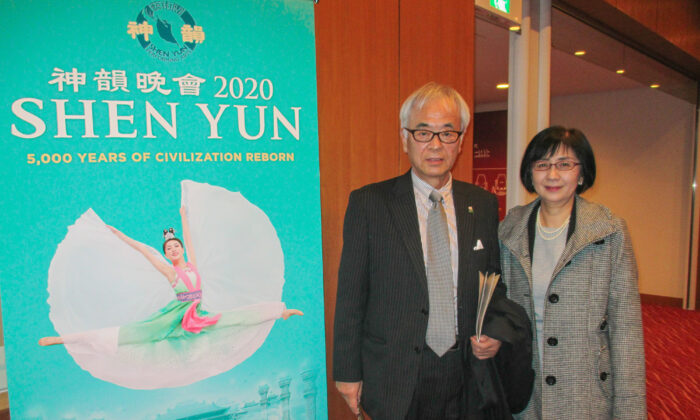 TOKYO, Japan—An enthusiastic educator who has an avid interest in Chinese culture, Kitahara Fuminari is a visiting lecturer at Keiai University and a former principal of Chiba Hideka Senior High School.

“I truly feel that Shen Yun brings us back to our original true selves,” Kitahara said after he attended the performance presented by Shen Yun Performing Arts New York Company at Bunkyo Civic Hall in Tokyo on the evening of Jan. 29, 2020.

“[Shen Yun] is indeed a superb performance with rich content,” he said. “I was deeply touched by the long and profound Chinese history [performed by Shen Yun].”

“In under 10 minutes each, these mini-dramas recount these timeless legends, bygone heroes, literary classics, celestial paradises, and more,” according to Shen Yun website. “Every dance embodies and celebrates the virtues that were at the heart of Chinese civilization for thousands of years: loyalty, courage, compassion, and piety.”

Kitahara enjoyed the contents of these vignettes.

“The [performance] on the stage fully demonstrated female’s gracefulness and male’s masculinity,” Kirahara said with praise.

During the magnificent performance, the educator was especially impressed with the vibrant colors at the dance dramas depicting the authentic culture of China’s ethnic minority groups. “|The stage arrangements and color matching are full of characteristics of Chinese traditions,” he noted.

“From [Shen Yun performers’] dance skills and the accompaniment played by the symphony orchestra combining Chinese and Western instruments, I can tell they have undergone rigorous training,” he continued, “This is something that deeply touched me.”

“I enjoy [Shen Yun’s] music for which Chinese instruments are played,” he added. “The Chinese rhythm is very unique and very pleasing to the ear.”

As a Christian, Kitahara was especially moved by the spiritual connotation of traditional Chinese culture in the performance. “I truly felt that Shen Yun is taking us back to our original true selves,  and told us the existence and significance of godhood. “

“The spiritual connotation in the [Shen Yun] show is very meaningful,” he said. “I am deeply moved, and hope that Shen Yun can be even more successful.”

“The short story dances are like little excerpts from Chinese history. They may be about the Yellow Emperor of antiquity, a modern-day tale, heroes, deities, or colorful characters that have appeared throughout the millennia of dynasties,” according to Shen Yun website.

“The value of human rights is deliberately included in dance dramas. It’s something good to pass various messages on to China through different approaches,” Kitahara said.

With reporting by Jerry Hirohiro, Miranda Tsai, and Billy Shyu.