Shen Yun is a Story of Selflessness, Says Business Owner 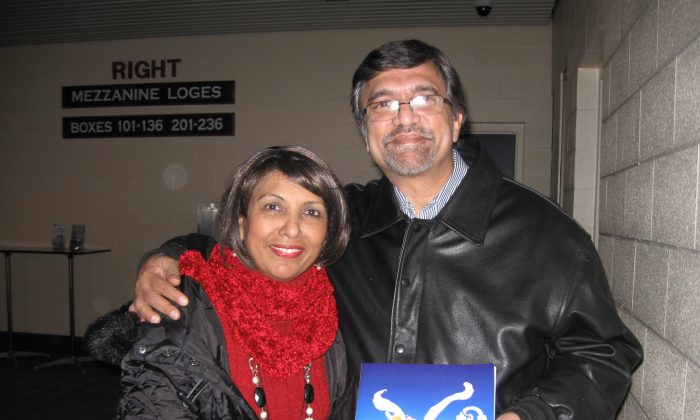 Business owner and career counsellor Brinell Coelho, seen here with her husband, Trevor, enjoyed the spirit of selflessness portrayed in many of the traditional Chinese legends in the Shen Yun performance she attended at Centre In The Square in Kitchener on Jan. 14, 2014.

KITCHENER-WATERLOO, Canada—As a business owner and career counsellor, Brinell Coelho knows that helping others can be a most rewarding endeavour.

It was this spirit of selflessness that she appreciated in many of the traditional Chinese legends that played out in the Shen Yun Performing Arts opening show Tuesday at Centre In The Square in Kitchener.

“They really depicted Chinese culture: compassion, love, and purity of thought and action. It was really wonderful,” she said.

“It’s about doing the right thing in life and doing the best that you can—not only for selfish motives but the greater gain of others. That’s why I was really inspired.”

Mr. Coelho was touched by the gentle beauty of the dancers’ movements and colourful silken costumes.

“The colours, the costumes, the silk, the elegance, the flow, the daintiness, the way they do things—beautiful,” he said.

Ms. Coelho was also captivated by the dancer’s ultra-light yet expressive movements.

“The women are very fragile, dainty, they all have this beautiful figure, and they are so agile—the jumping, dancing, darting around, slow movements, and quick movements of the feet without even seeing it—like they are gliding across the floor,” she said.

“The women and the men danced so elegantly and they really made you feel like they were like fairies and spirits from above,” she added.

This semi-devine culture was decimated under decades of repressive campaigns waged by the Chinese communist regime, according to the Shen Yun website.

Some of the dances, which portray good triumphing over evil, were particularly poignant in light of today’s real-life human rights abuses in China, said Ms. Coelho.

“We will always have [those] who want to persecute the good,” she said. “You must hold fast to what you believe in, and you will have the heavenly support, you will come out victorious.”

She was also moved by Shen Yun’s baritone, tenor, and soprano soloists. The singers perform bel canto style sung in Chinese lyrics that philosophize on the origins and meaning of life, according to the Shen Yun website.

“Very powerful voices,” she said. “I think it’s also the content of the [lyrics]—I’m sure many people have been inspired by the thoughts of the words that came with the song.”