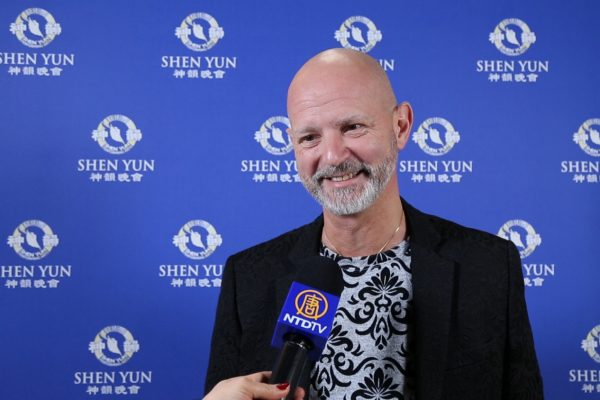 PARIS–A warm and large audience had again gathered for the third performance of Shen Yun Performing Arts this season in Paris.

Jean-Jacques Devert was among the spectators at the Palais des Congrès on Jan. 18. A well-known personality in the luxury hotel sector, Devert was General Manager of Château Saint Just, the first hotel and conference center in France owned by the British group Principal Hayley. He is now Director of Development at Châteauform, with the mission of finding and developing new sites to set up new establishments in France and Europe.

This Friday evening, he left behind the world of French luxury hotels to start a journey into the 5,000 years of the Chinese culture.

Jean-Jacques Devert said that although the evening was a discovery of a totally foreign and ancient civilization, he found the traditional Chinese culture to contain “a little bit of the culture of all people.”

“It’s a wise and great decision to share a little bit with the whole world, to speak the right words and tell the story from the beginning, all over the world, it’s a great adventure,” said Devert. Indeed, the New York-based company Shen Yun Performing Arts was created in 2006 by a group of Chinese artists who wanted to revive this very rich culture, which was almost lost following the arrival in power of communism in 1946.

Shen Yun’s unique sound didn’t go unnoticed either, as Devert mentioned mentioned of the orchestra: “It is also a beautiful discovery to mix traditional Chinese and classical instruments.”

“It is a very, very good experience and transports us into the Chinese world, without being very different from what we know in traditional international music,” Devert said.

Devert believes this international aspect is instrumental to convey “a message of peace, via the whole history and ages of China.”

Although the overall message was peace, Devert noticed that, as the Shen Yun stories of contemporary China showed, those preserving the traditional, divinely-inspired culture today face persecution in communist China where there is no freedom of belief.

“We must no longer have repression,” Devert said. “Then, I hope that Shen Yun’s message will help all of this to live again correctly.”