Shen Yun Is ‘A message for all of humanity’ 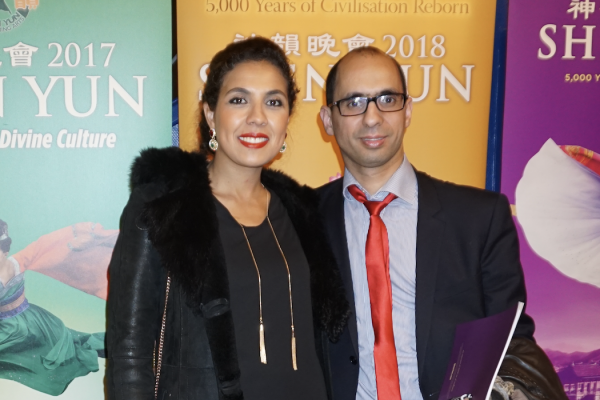 ROUBAIX, France—Ms. Anssar Houdali and Mr. Rachid Yakoubi attended the premiere performance of Shen Yun Performing Arts at the Colisée de Roubaix on Feb. 21, and the pair said they were stunned by what they termed a phenomenon.

“It was fabulous! It was beautiful,” said Houdali. She said she was moved by the harmony created between the color and movement of the dancers’ dress, and the animated digital backdrop that came to life behind them. She rightly assumed it was a unique piece of technology, something New York-based Shen Yun developed in-house and has a patent to, as explained in the program.

It wasn’t just a visual harmony, Houdali added, it was also present in the music, and the way the orchestra synced with the dance perfectly.

Yakoubi, a surgeon of urology, shared his wife’s impressions.

“There is a pure artistic side: the choreography, the music, the whole setting was fantastic!” he said.

But in addition to the perfection of the external form, Yakoubi added that there was also a spirit to the performance—a spiritual message—and in fact possibly a political one as well.

Yakoubi brought up the fact that Shen Yun cannot be seen in China, and the stories in the performance that address the suppression by the communist regime of the very traditional culture Shen Yun is trying to revive. This is one message, he noted, but aside from that, there is something more universal people should take from the performance.

“There is a message of altruistic love, love for the other, tolerance, and that is great, really great! So it’s not just art for art’s sake, but it’s a message for all of humanity. That’s what’s great about it,” Yakoubi said.

Houdali agreed with the idea of a universal message.

“What I perceived is that there is a kingdom of Us. There is no kingdom of I or kingdom of You, as it doesn’t work very well and it doesn’t last. But when we are in a kingdom of Us, it means that we include everyone, no matter what the differences, it works, it lasts and it is like an imitation of the human body,” she said. The same way all organs of the body work together to nourish the body as a whole, so that we can stand upright, she felt that sort of wholeness in the cohesiveness of the performance.

“I felt a little bit the same here,” she said. “And It’s time for humanity to embrace this concept.”