Shen Yun Is ‘A Masterpiece That Cannot Be Described in Words’ 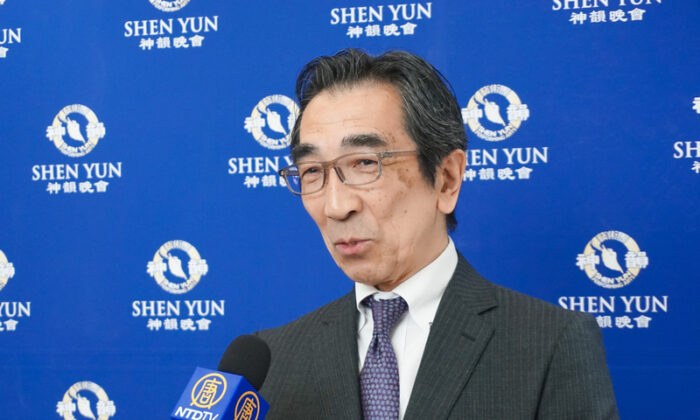 FUKUOKA, Japan–Shirouzu Kazunobu, owner of an accounting firm in Japan’s Fukuoka, said “It’s indeed a masterpiece that cannot be described in words,” after he watched the performance presented by Shen Yun Performing Arts New York Company at Fukuoka Sunpalace Hall on the afternoon of Jan. 21, 2020.

“I have never seen such a performance,” he said. “I seemed to see the revival of the [authentic Chinese] history.”

“The storyline was vividly acted out by the performers along with the beautiful music,” Shirouzu Kazunobu said. “[Shen Yun performance] is just amazing.”

Shirouzu was also amazed by Shen Yun’s dynamic digital backdrops that let the audience members have the feeling of transcending time and space.

“It’s practically superb technology that allows actors to seemingly jump out of the backdrops and jump back freely. It can help us better understand the plot,” he explained. “It’s truly amazing.”

“The costumes and dances, coupled with the backdrops and other elements, contributed to such a marvelous performance,” he noted. “It’s indeed incredible.”

“For 5,000 years divine culture flourished in the land of China. Humanity’s treasure was nearly lost, but through breathtaking music and dance, Shen Yun is bringing back this glorious culture,” according to the Shen Yun website.

Shirouzu Kazunobu said that after watching the Shen Yun performance, he further realized the magnificence of “the profound 5,000-year Chinese history.”

“Its great wisdom; [Shen Yun] lets the audience understand the [authentic Chinese] history in the form of [classical Chinese] dance,” he added.

He also praised Shen Yun’s demonstration of Chinese history, because people can “learn from the history so that the good parts can be applied to the modern society while avoiding the bad parts from happening again.”

“This is the wisdom that can usher us into the future,” he said with emphasis.

Haraguni Masahiro, medical doctor at Tomi Shokyo Hospital in Japan’s Okinawa, happened to attend the same performance at Fukuoka Sunpalace Hall that afternoon, and highly spoke of the spectacular performance.

“I was deeply touched by the actors’ perfect techniques,” he said, “Regardless of whether it is flipping or turning, the level of difficulty is far beyond what I imagined.”

“I was truly overwhelmed,” he said.

The medical doctor felt Shen Yun had surpassed other performances he had seen on stage, because he “was deeply touched.”

“Every artist is outstanding,” he explained. “What deeply touched me is the perfect dedication among all of [Shen Yun dancers].”

“The overall momentum of dancing in great unison on the stage is overwhelming,” he added.

Haraguni was also amazed by the marvelous digital backdrops.

“I felt it’s incredible to see the artists suddenly walk out of the backdrops,” he said. “How could it be possible [for the dancers] to descend [to stage] from the backdrops and vice versa,” he exclaimed. “It’s amazing.”

The medical doctor was surprised to learn that the performance aiming to revive the profound traditional Chinese culture cannot be performed in China and that Falun Gong is still persecuted by the Chinese Communist regime in China.

“I was shocked to hear of the ongoing persecution [against Falun Gong in China] from the emcees,” he said. “It was the first time I’ve ever heard that Shen Yun is still cannot perform in China.”

“I felt it a pity that the Chinese people [in China] cannot appreciate such a beautiful [performance of] the traditional culture,” he added.

With reporting by Lu Yong, Miranda Tsai, and Billy Shyu.