Shen Yun Is ‘A Magnificent Spectacle With an Important Message’, Defense Analyst Says 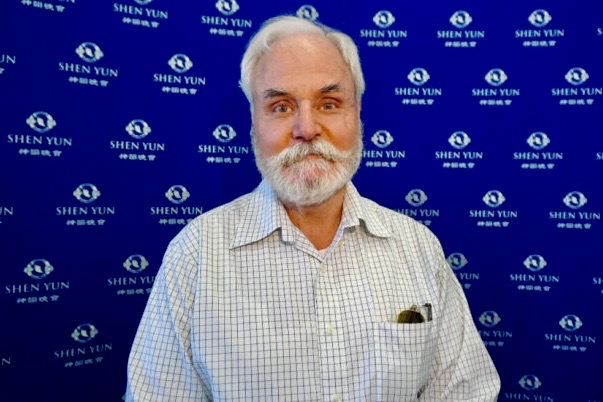 FAIRFAX, Virg.—Some of the brightest minds in America have come from distant shores, seeking freedom, safety, and the ability to pursue their dreams. Many artists who founded Shen Yun Performing Arts are among them. They escaped persecution in communist China and established themselves in New York before forming seven touring groups that bring traditional Chinese culture to audiences around the world. Today, in Fairfax, Virginia, one think tank’s defense analyst recognized the important spiritual practice that Shen Yun artists abide by, one that is unfortunately persecuted in China today: Falun Dafa.

“I think Shen Yun is wonderful. My wife has seen it three times and this is my first time. The dancing is of course magnificent. It’s a real treat to see the traditional Chinese dance, which we don’t know much about here,” said Paul Giarra, who works as a strategic planner and security analyst at a firm in Virginia and attended the afternoon performance at the George Mason University Center for the Arts on Jan. 19, 2020.

Giarra said he was aware of Falun Dafa and glad to see the dance story included in the program about “the repression of that expression of religious freedom in China. I was a little surprised at how explicit it was. I thought it’s going to be more subtle. But I’m glad it was explicit,” Giarra said.

Falun Dafa is an ancient meditation practice that teaches truthfulness, compassion, and tolerance and incorporates energy-strengthening exercises. It is one of many world traditions that looks to the divine for artistic inspiration.

The website explains: “Today, Shen Yun’s artists—dancers, musicians, choreographers, composers, and the entire team—follow this noble tradition.  For them, this spiritual connection is motivation for striving to excel, is the heart behind each movement of the dancer and each note of the musician. It is why audiences can feel there is something different about Shen Yun. Their source of inspiration, rooted in traditional Chinese culture, is the spiritual discipline known as Falun Dafa.”

In a Shen Yun performance, 20 or so vignettes depict a wide variety of stories from different places, cultures and times throughout Chinese history.

Giarra felt the values were clear about what Shen Yun encourages in the world: “Freedom of religion, freedom of expression, self-determination, freedom of choice, rule of law, not rule of Party,” he said.

About the combination of Eastern and Western instruments “it’s great and I think that’s what we all should strive for,” he said, referring to Shen Yun’s unique live orchestra.

Traditional Chinese culture, believed to be divinely inspired, carries on the legend of a Creator who will one day return to earth for the good of all mankind. Such scenes are incorporated on stage in Shen Yun’s dances.

“I’m going to Catholic Mass right after the show. So I like those themes a lot,” Giarra said, adding that he feels it’s important to support everyone’s freedom of expression.

If Giarra were to describe Shen Yun to a friend or peer, he said he would call it, “a magnificent spectacle with an important message concerning the situation in China. I’ll take home a warm memory of the dancers and the orchestra, and a reminder of what’s going on in China.”