Shen Yun Is ‘A Magical Performance That Transports Us Through Time’, Says French Actress 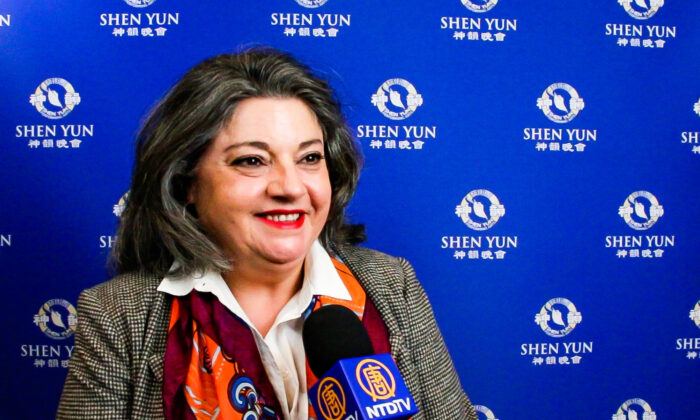 MONTPELLIER, France—One of the reasons why movies and television are so entertaining is because of the talented actors and actresses in the business. For Shen Yun Performing Arts, the dancers can tell stories just as dramatically but without the use of a single spoken word.

“I found it to be an absolutely magical, wonderful performance! It is one that transports us through time,” said actress Elisabeth Beltram from Martigues after she had watched Shen Yun on Saturday.

Beltram has made a name for herself in French TV series such as “Plus belle la vie”, “Camping Paradis” and feature films such as “La French” and “Martin”.

“Really, you go from the present era to centuries back and it was absolutely wonderful. I loved it! A beautiful and magical performance,” she said of Shen Yun.

Beltram said she was “overwhelmed” because she “felt really transported with all these lights, these colors”, as well as “these special effects with the interactive screen” that she described as “magical”.

She also shared that she thought the performance to be at “a very, very high level”.

The artists of Shen Yun receive their training and education from Fei Tian Academy of the Arts and Fei Tian College in New York.

“They are really great artists. Really, I congratulate them. Whether it’s in the category of dance, singing, whether it is, men or women, the music … It was really fantastic.”

She appreciated the exceptional choreography of the dancers as classical Chinese dance allows for communication to take place between the dancers and the audience without speaking.

“You can see that the actors are having fun, all the actors are enjoying their show, which is theirs to own and they are really getting into it,” she said. “You understand everything even though there’s no dialogue, you still understand all the scenes because of their talent.”

The spirituality that existed throughout China’s history also touched her. “It pays tribute to ancient Chinese deities,” she said, bringing this spirituality closer to “the Buddhist culture”.

“Yes, I think you come out of it more zen,” the actress said. “It makes you escape.”

Shen Yun‘s artists practice a form of Buddhist-school meditation called Falun Gong which is based on the universal principles of truth, kindness, and forbearance.

Beltram said such principles are meaningful to her.

“I felt it because I’m getting a little bit closer to it myself … I’m trying to get closer to it. It’s sometimes difficult, but let’s say it’s a philosophy of life that we should have nowadays—to live better and to live in peace,” she said.