Shen Yun ‘Is a Feast for the Senses’ 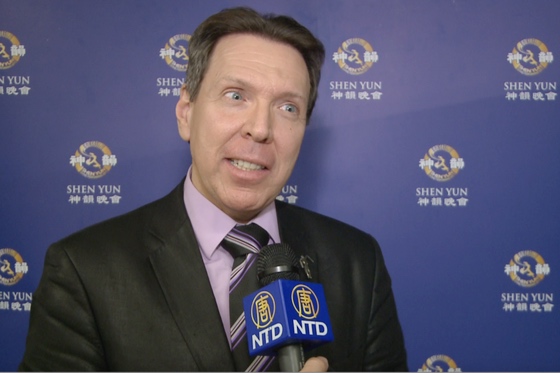 He performed in operas and concerts throughout Europe, as well as radio and television station broadcasts. He branched out in 1996 and now is known for this work in stage direction and as a moderator.

“What impressed me the most was the solo performance on the two-stringed Chinese instrument. What an excellent tonality and timbre. It resonated well and the soloist appeared to be one with the instrument.”

The two-stringed erhu is 4,000 years old and continues to stir audiences with its hauntingly beautiful sounds that have been compared both to the sound of the violin and of the human voice.

The professor said, “What appealed to me above all was that these [performers] not only uphold a 5,000-year-old tradition but also display a great love for that tradition.”

“The symbiosis of the Eastern and Western instruments was harmonious,” the professor said. “In my mind, this combination of these instruments brings the Western audience and Chinese culture much closer … and is perfect in today’s world.”

“Shen Yun relieves stress right from the beginning of the show and it released any tension I felt. In short, the energy created on-stage radiated outwards towards the audience and had a relaxing effect, especially on me,” professor Widholz said.

Using his musical background, he listened carefully to the vocalists: “I noted with interest that the vocalists tried to bring together Chinese music with the European canto culture. This is another interesting observation I made today … What I’m trying to say is that this type of musical expression should be developed further.”

Just as many in the audience, the professor was inspired by what he saw and heard during the Shen Yun performance.

“I was truly inspired this evening by everything, not just the music, but also by the visual effects. That includes the color gradation of the costumes and the 5,000-year-old tradition that was brought to the audience via the computer simulation, creating a homogeneous full story. That was magnificent.”

He will tell everyone he comes in contact with that the Shen Yun performance “is a feast for the senses, as perceived through the eyes and ears.”

Reporting by Alex Hamrle, NTD Television and Heide B. Malhotra