Shen Yun Is a Blessing for Taiwan 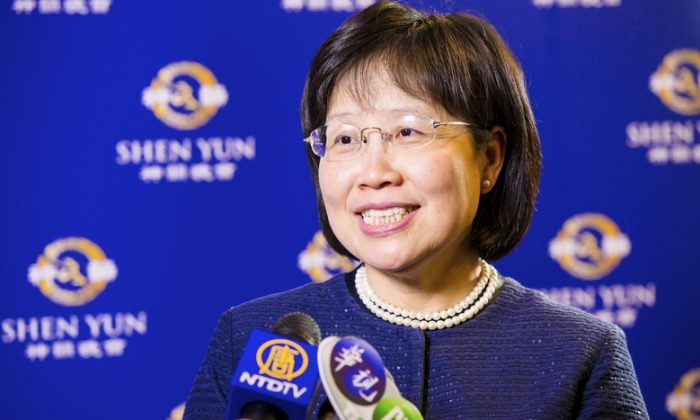 President Huang praised Shen Yun’s performances from three aspects. She said, “Every time when I saw Shen Yun, I am truly touched due to the following three things: First, it’s a combination of hi-tech and art, because there are many four-dimensional presentations.

“Second, it’s also a combination of modern and classical (stories). Take the piece The Power of Compassion for instance. The scenario is based on our modern society.

“Third, the entire performance showcased the essence of the principles of Truthfulness, Compassion and Tolerance, from the beginning to the end.”

In addition to what shown in the programs, there is a combination of Eastern and Western music instruments. It’s a wonderful combination, and the world is supposed to be like this,” she said.

“Today’s synchronization of music is something very difficult. It’s really the so-called ‘When the East meets the West.’ It’s a perfect combination … .”

Talking about the program that touched her most, she noted, “the piece, The Power of Compassion, it successfully blends modern life and the actual situation in the society. In the society, there are good and evil forces. It depicts the power of compassion by means of dances to urge people to return good for evil. By doing so, our spirit can ascend to a new dimension, and it will be the force that can make the society better. So, I was impressed most by this program [The Power of Compassion].”

“Such a performance is a blessing for Taiwan, as it can upgrade Taiwanese people’s spiritual horizon. Everyone should see Shen Yun once a year to elevate our spiritual level. I hope that Shen Yun can perform in Tainan every year, so as to make the society in Tainan better.”

“It’s very warm and touching. Shen Yun’s dancers have undergone rigorous training. … We can tell Shen Yun’s meticulous arrangements. In this regard, we are really grateful.”

Finally, she urged, “In the future, as long as you hear that Shen Yun is coming, you had better book tickets as early as possible, as all the tickets for the shows in Tainan were sold out completely.”

Tainan City Councilor Zeng Pei-Ya attended the show presented by Shen Yun Performing Arts New York Company at Tainan Cultural Center for the first time on the evening of March 12, 2015. After seeing the performance, she said that it was indeed worthwhile to be there and she felt refreshed.

She said, “I was really amazed by the show here today.”

“I was truly touched (by the performance). It’s indeed great. The show really touched the bottom of the audience’ hearts, and let us feel that it was indeed worthwhile to see the show,” the councilor said.

When it comes to the pieces that stood out for her, she said, “The scenes that teach people how to be good, especially the Chinese characters of ‘Truthfulness, Compassion and Tolerance’ that we just saw.”

Ms. Zeng continued, “as soon as I saw the first program [Following the Creator to Renew All Things], I could tell that the entire show was to teach us to be decent people.”

According to the Shen Yun website, themes include: “Principles such as benevolence and justice, propriety and wisdom, respect for the heavens, and divine retribution.”

Councilor Zeng urged that people should not miss the opportunity to see the show. She concluded by saying, “Compassion is a virtue. As long as you come to see the show, you can feel it.”

Deputy mayor of Tainan Yen Chun-Tso has been taking time off his busy schedule to watch Shen Yun’s performance in the past eight years. This year is no difference, he joined Shen Yun’s fans at Tainan Cultural Center the afternoon of March 15. After the performance, he said that he wished such memorable performance could be promoted at every corner of the world.

Each year Shen Yun’s performance and stories touched Mr. Yen even more. “Through dancing and technology, the performance brings out authentic Chinese culture, which includes the costumes, colors, and music. At the same time it teaches people to be kind. Once the society becomes kinder and more peaceful, it will bring development in culture and civilization.”

Mr. Yen admired and was touched by how the stories inspired forgiveness. “It tells me how to forgive the enemies and take care of them. This issue relates to everyone in society—I really admire that.”