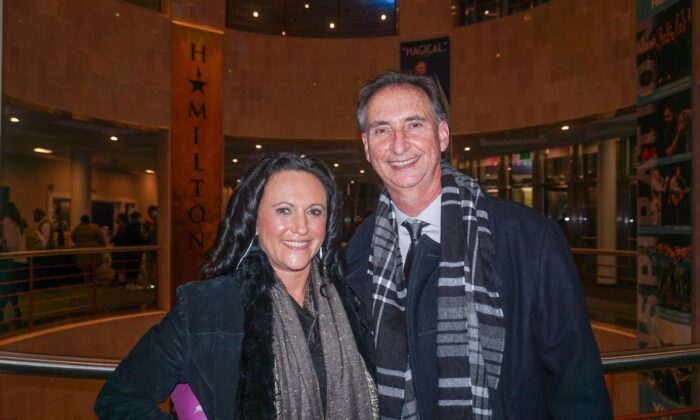 “It’s a great show. I enjoy it very much,” said Mr. Lawrence, who saw Shen Yun with Cynthia Yaeger at the Belk Theater on the evening of Jan. 8.

Mr. Lawrence noted the rich heritage of classical Chinese dance, and how impactful it has been around the world.

“It’s amazing how a lot of dancing has originated from Chinese dancing,” he said.

“Preserving 5,000 years of Chinese culture, built on traditional aesthetics, classical Chinese dance was once passed down among the people, in imperial courts, and through ancient plays,” explains Shen Yun‘s website.

“Over thousands of years, it was constantly refined, eventually developing into the vast and distinctly Chinese dance form we know today.”

Through this rich art form and soothing music performed by an orchestra that combines traditional Chinese and classical Western instruments, Shen Yun aims to revive China’s divinely inspired culture that has been all but destroyed in recent times by the Chinese Communist Party.

Besides the artistry in the performance, Mr. Lawrence said he enjoyed the spirituality in Shen Yun.

“To deny God is to deny yourself. I’m sure we all interpret that in different ways. But I liked the related [spiritual] theme,” he said.

Ms. Yeager said she found the performance and the skills of the artists amazing.

“Everything from the music to the passion behind it all was amazing,” she said. “I could just feel it. It was so great.”

“Seeing them and their movements and the dance with the music just inspires you. It makes you want to do good and be great.”

The two had high praise for Shen Yun’s music as well.

“That was really, really meaningful to hear. Music is medicine,” said Mr. Lawrence.

Ms. Yeager was particularly impressed by the erhu, sometimes known as the “Chinese violin,” which only has two strings.

“So beautiful, [the erhu player] did it amazingly,” Ms. Yeager said. “The music is touching to your heart and soul.”