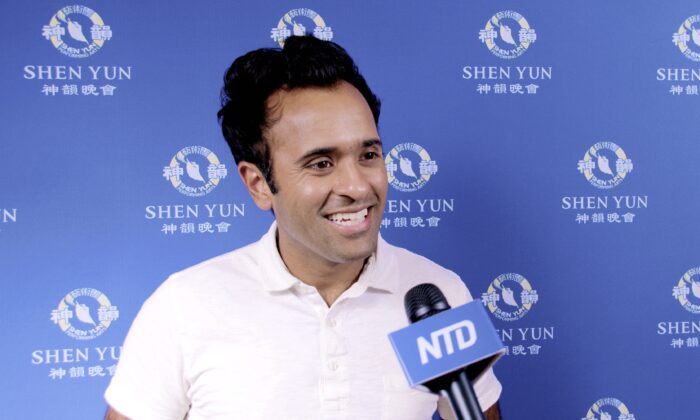 COLUMBUS, Ohio—Vivek Ramaswamy, an author and political commentator, felt that Shen Yun Performing Arts’ soprano had transcended the notes and the words of her song.

“She was a stellar singer. I thought her voice gives you a sense for really paying attention to the message even more because of the voice and the power of the way she was able to sing it,” said Mr. Ramaswamy.

“I thought that she was outstanding. The pianist and she were able to actually create something special together that reminded me of a lot of Western opera, but obviously, was in a very different cultural context that I thought brought a lot of other musical elements together that was together quite inspiring,” he elaborated.

The libretti used in Shen Yun performances are written by Shen Yun’s artistic director, D.F. Although the songs are sung in Chinese, the digital backdrop provides a translation so that audiences are able to understand.

The reflection of the human spirit, being able to see a higher power, whatever that power may be, I thought inspiring.
— Vivek Ramaswamy

“The reflection of the human spirit, being able to see a higher power, whatever that power may be, I thought inspiring. And the fact that she was able to use music and the notes that she was able to strike as a singer, to be able to awaken something that you wouldn’t get to with an argument or with just telling it to them. But the power of using the music to be able to open people’s eyes to something, I found personally inspiring,” Mr. Ramaswamy said.

Shen Yun not only presents beautiful dance and culture to audiences around the world, but it also showcases the essence of the spirituality of China. The two major religions of China before communism were Buddhism and Taoism.

“I like the idea of thinking about a higher power as well, I think there’s something that binds us together and that can lift us up. And having faith in that and the tradition that comes with that, I think is something that we ought to remember in the current moment,” Mr. Ramaswamy said.

Although Shen Yun is promoting traditional Chinese culture, the company is not able to perform in China. It uses art to raise awareness of the Chinese Communist Party’s censorship and crimes against humanity.

Every dance that Shen Yun puts forth contains beauty and hope.

“I think it’s beautiful. I think it’s stunning. I think it was a great way to be able to also take a step back from the moment you live in. These are classical dance forms that have existed for generations. The ability to take a step back from your every day, your running from one place to another, to be able to see a classical dance form that really has been around for a very long time, just makes you think about where you fit into a bigger picture, both not only around the world but even across history. So I loved it,” said Mr. Ramaswamy.