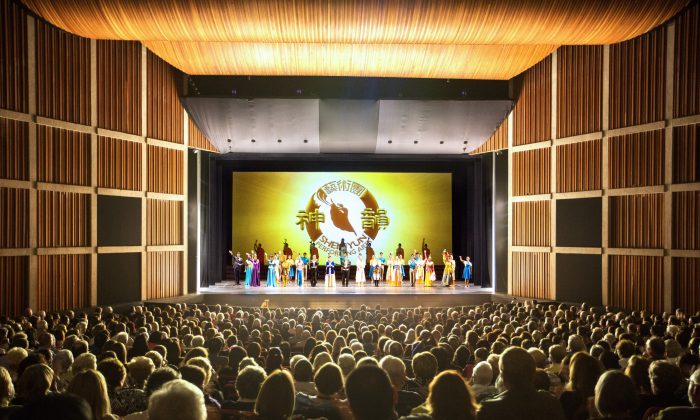 Shen Yun performers take a curtain call at Hamilton Place Theatre in Hamilton, where they played to a full house on May 10, 2016. (Evan NIng/Epoch Times)

HAMILTON, Canada—There are times when watching a performance can change one’s life, inspiring one to become a better human being with a clearer sense of purpose and direction.

Since its establishment in 2006 by a group of overseas Chinese artists, Shen Yun has inspired millions of audience members with its depiction of the glories of China’s divinely inspired ancient culture.

On the evening of May 10, Shen Yun returned to Hamilton’s Hamilton Place Theatre for the seventh year. In the audience was Francisca D’Costa, a former dancer, singer, actress, and choreographer in India.

“It’s very beautiful. It’s very spiritual, divine, and perfection,” she said.
“I loved the dancing, the costumes, and they look like angels when they’re dancing—all the ladies. I really love the dancing and the costumes very much. There is no word to describe it.”

Ms. D’Costa, who after moving to Canada became a kindergarten teacher, noticed the connection between heaven and earth, an important concept in traditional Chinese culture that Shen Yun portrays.

This was something that spoke to her in particular.

“It shows me that it is very important even though we are on earth, we have to focus on Heaven and God. That’s what it tells me,” she said.

“It makes me feel very peaceful and happy and emotional, too.”

She felt a great deal of hope in this principle.

“If we focus on heaven, I think life will be calmer, and even if there are difficulties it will be easier to go through them if we focus that there is a divine power above that will take care of us in times of trials and tribulations,” she said.

“That will create more love and unity toward each other if [people] bring spirituality into their life, more than being involved with earthly living.”

Her companion Rick Rankin also felt that there was something special about the performance, which he felt offered a glimpse of what’s to come in the world.

“In the spiritual aspect there’s going to be unity. I feel that eventually we’re all going to stick together and be thinking like the sparrows flying or the starlings when they fly all together,” he said.

“[The performance] is very spiritual and it’s going to bring in the divine,” Mr. Rankin added. “You bring the feeling home with you.”