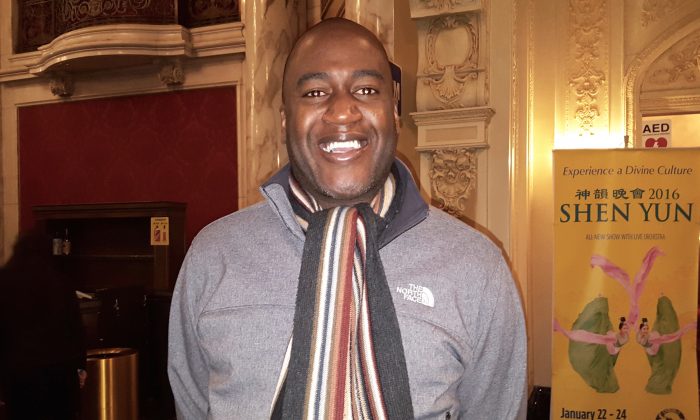 BOSTON—Aaron Roberson just glowed as he left the Boston Opera House. He planned on going for a walk so he could think over the beauty and inspiration he just saw in Shen Yun Performing Arts and process the vastness of what he witnessed.

The emcees had said that New York-based Shen Yun puts on an all-new performance every year, but Mr. Roberson said he didn’t “care if it’s only a little different, I still want to see it again. I actually want to tell people about it, it’s so beautiful.”

He was so in awe that “my mouth was literally wide open,” said Mr. Roberson, a business manager at Apple. He attended the performance with a friend, on Jan. 22, who had to more than once remind him to close his mouth, Mr. Roberson said with a laugh. He described that he was so close to the stage he could peer into the orchestra pit and see the pipa (a Chinese lute) and erhu (a two-stringed instrument).

Those ancient instruments blended into the familiar and more modern Western orchestra instruments—that blending described exactly the type of world Shen Yun created for Mr. Roberson. It was nothing an advertisement could do justice, he said. It left him inspired and “just awestruck.”

“I’m just inspired, I’m inspired. This music and this dance, it makes you just more humble,” he said.

Mr. Roberson runs, he explained, and that’s his form of meditation. When he runs, he puts himself into another world, a peaceful world, and the world he saw in Shen Yun was one he wanted to go toward through his meditation while running.

Shen Yun aims to revive the divinely inspired traditional Chinese culture, and does so by taking the audience on a 5,000 year journey through its history with music and dance. Mr. Roberson was appreciative and inspired by the fact that he was not only seeing the divinely inspired China of the past, but how that culture lives on today.

The culture was once nearly destroyed in China, Shen Yun explained. When communism took power in China, the regime launched campaigns like the Cultural Revolution to root out the ancient beliefs, and the suppression continues today.

But in Shen Yun there was also “hope for a better future.”

Mr. Roberson saw the hope in the artists who, although they might have been born into the environment of China today, “they still have the hope that you can change the world, and you can keep that hope going.”