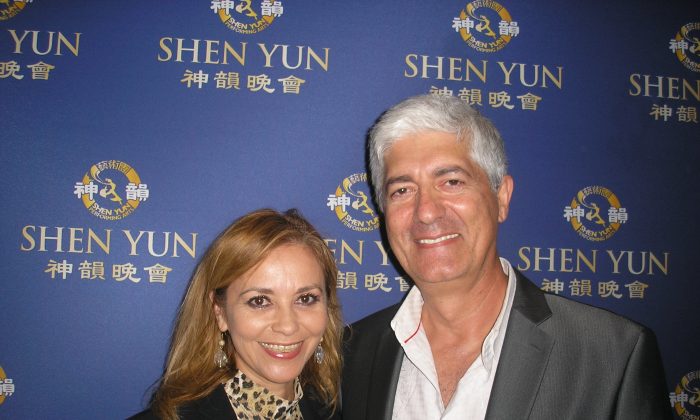 “I think it’s wonderful,” he said. “I find it to be very emotional to watch, very feeling-oriented, and I have deep respect.”

Alain Azoulay is an actor and producer originally from Casablanca, Morocco. He starred in feature films Boys of Abu Ghraib, Speed Dragon, and played Amy Winehouse’s father Mitch Winehouse in Amy Winehouse: Fallen Star. He also appeared in a record number of films in the 2013 Cannes Film Festival with five shorts and one feature film.

“As a filmmaker, we strive to affect people emotionally,” said Mr. Azoulay. “That is the magic of film, and I think it is good to see a show like [Shen Yun]. It gives you a different perspective on how you can bring emotions into the screen.”

New York-based Shen Yun is now in its ninth year of a Chinese cultural renaissance—the revival of 5,000 years of the true, divinely inspired culture of China, according to the company website.

A Shen Yun performance features the rigorous and expressive art form known as classical Chinese dance, to tell stories from ancient Chinese legends to the modern day. A live orchestra with both Eastern and Western instruments balances the visuals perfectly, while stunning costumes, vibrant backdrops, and musical soloists complete the experience.

“I love the spinning,” said Mr. Azoulay of the dancers and their long, flowing costumes. “I love the fabrics that are used, especially the sleeve dance, for example. I found that to be extremely unique.”

Mr. Azoulay also loved the background special effects, which allowed the dancers to appear to leap into the backdrop and fly off into the air.

“It is a little bit of a magic show too,” he said, also commenting that the unity and discipline of the dancers was wonderful to watch.

Shen Yun encompasses “a sea of traditional Chinese culture,” states the website. “Mortals and divine beings merge on stage as one. Principles such as benevolence and justice, propriety and wisdom, respect for the heavens, and divine retribution, all come to life, washing over the audience. Originating from Confucianism, Buddhism, and Taoism, these ideals are the essence of traditional Chinese culture.”

“My feeling is one of joy, happiness, deep respect,” he said. “I can’t describe it. It is just something you can’t put into words. You feel it. It is very difficult to describe, but I assure you it is very spiritual to me.”

“I loved the show,” he said. “It’s something that you can’t compare to anything else. There is no comparison.”

Mr. Hoffman said most of his work is in live television broadcast, so he understood the difficulties behind the performance.

“I highly appreciate live performance because it is truly an art where there is no room for mistakes,” he said. “I loved how seamless the performance was from the rear projection screen to the dance floor.”

With his artistic eye, Mr. Hoffman was also struck by the costumes and props, such as one dance number’s colorful handkerchiefs, which the dancers spin and toss into the air with ease. He said it was extraordinary and just outstanding.

He also said the dancers seemed to be “lighter than air” and very graceful.

“I loved the ethnic tracing through all of the performances,” said Mr. Hoffman of the traditional Chinese cultural elements.

Although Shen Yun cannot be seen in China today, the non-profit performing arts company is committed to bringing China’s noble traditions and values to the world. The company produces an all-new program every year.

“I would recommend the show to everyone,” he said.

“Highly recommend it to people who are very critical of art and performance,” he said. “It was superior.”