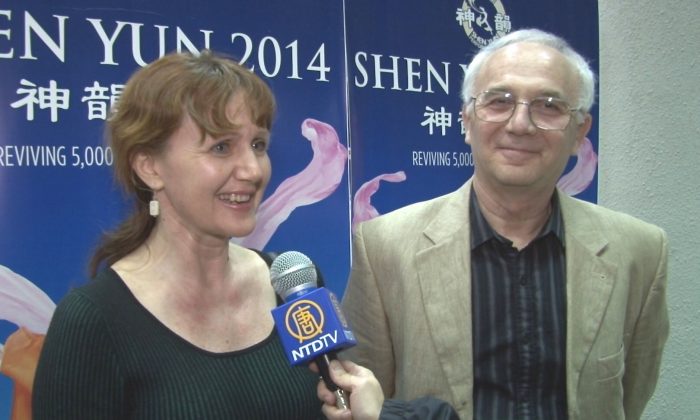 Marianna Simina and husband her, Gregory, at the Koger Center for the Arts after seeing the world-class Shen Yun Performing Arts. [Courtesy of NTD Television]
Company

“Enthusiastic audiences around the globe have shared this sentiment throughout Shen Yun’s global tour,” according to the Shen Yun website. “The company formed in 2006 with a guiding mission to reclaim and renew China’s divinely-inspired cultural heritage.”

“It’s gorgeous. It’s picturesque. Great graphic design, great movements, very synchronized and very professional. Absolutely professional, and it was the introduction to the Chinese history that was very important as well,” said Ms. Simina, a painter and graphic designer.

“Chinese culture is a 5,000-year-old ancient heritage enriched by principles such as benevolence, justice, wisdom, propriety, and respect for the heavens,” according to the website.

“It was fresh, friendly and inviting. I really want to learn more about traditional Chinese culture now,” Ms. Simina added.

She was also captivated by the animated backdrops that interacted seamlessly between stage and projector screen.

“The fairy tales and the dragon [story] was great. It was really great that it was the combination of real performing arts and the visual effects. It was absolutely amazing. Very, very accurate, very precise.”

“I liked it very much,” said Gregory Simina, who accompanied his wife to the performance.

Mr. Simina, a professor at the University of South Carolina, said classical Chinese dance was mostly new to him and he was left very impressed.

“It wasn’t just an education but yes, we learned a lot—absolutely,” he said.

“Classical Chinese dance has a long history of thousands of years, passed down continuously within the imperial palace and ancient Chinese theater and opera,” the website says. “Soaking up profound wisdom from every era and dynasty, it has become a complete system of dance embodying traditional aesthetic principles with its unique dance movements, rhythms, and inner meaning.”

In conclusion, Mr. Simina said, “It was great art, real art and we are very thankful” to see Shen Yun.