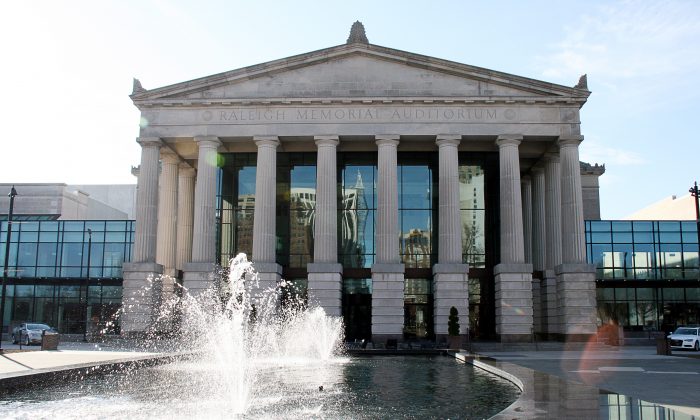 RALEIGH, N.C.—After seeing Shen Yun Performing Arts, Alice Celine was so inspired she was filled with gratitude for the performers. Immediately after the performance, she wanted to send a heartfelt message of thanks.

“I want to say thank you for the passion and commitment and the seeds of encouragement you have planted in us and our children. Thank you so much for all the effort and all the talent you have shared with us,” Ms. Celine said.

It was wonderful. It was the best performance I have ever seen.
— Alice Celine

“It was wonderful. It was the best performance I have ever seen,” she said. “I want to thank everyone so much. I wanted to go back and hug all the performers. Please tell them I thank them very, very much.”

Ms. Celine, a teacher in Raleigh, N.C., has a daughter who is a performing gymnast. She hoped her daughter could see Shen Yun the next time it is in town.

The artists of Shen Yun come from all over the world. In 2006, they created the company in upstate New York with the mission of reviving the divinely inspired traditional Chinese culture of 5,000 years.

Shen Yun tours the world every year to bring this ancient culture to life through the nearly lost forms of classical Chinese dance, the bel canto vocal technique, and the blending of ancient Chinese instruments like the pipa and erhu into a full Western orchestra.

For the last three years, Ms. Celine and Robert Walters have tried to make it to Shen Yun. Upon finally seeing it, Ms. Celine said, “It was absolutely remarkable.”

It was inspiring to her from the inside out. She said that Shen Yun brought her closer to the traditional Chinese culture and helps people come together globally. She thought the performance also inspired us to go on and be “the best we can be.” “It’s transformative,” she said.

This was because at its root, “I feel like it was reaching out to the soulful side of people and coming closer to what we all consider to be God or goodness, and to pull that out of ourselves and to stand up to that.”

According to the program, part of the artists’ rigorous training includes meditating and cultivating such goodness. In interviews, many of the dancers and musicians have spoken of the sincere heart and inner kindness they feel an artist needs to have in order to perform in a way that uplifts and inspires audiences.

Such dedication to their craft inspires one to action, which Ms. Celine thought was a good example for children as well.

The level of artistry is inspirational on many levels.
— Alice Celine

“It exposes us to determination and [the understanding that] hard work and effort pays off. Especially, I think the level of artistry is inspirational on many levels,” she said.

“It is what we hope to see in our children as gymnasts and artists—the passion. I just believe it was near flawlessness—the level and the dedication.

“And actually it inspired me as a teacher. I would like to show my children this. If you can do this in art, what can you do in yourself?”

“[It is] inspirational beyond generations,” she said.