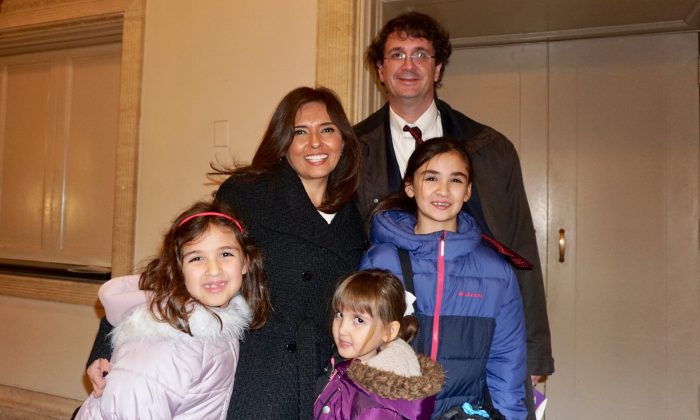 CHICAGO—Just a couple of days after Christmas, the Portis family attended a performance by Shen Yun Performing Arts. They left deeply inspired.

From little Naomi to her sisters Olivia and Maria, to their parents Sofia and Richard Portis, all left the first performance on Dec. 27 at Chicago’s Civic Opera House, with, as Mrs. Portis put it, “a very strong message about beauty” and about how “the divine connected with humanity.”

Or as Naomi Portis understood the performance to be: “about nature and about angels.” The dancers were like angels.

Naomi was on to something; the very name “Shen Yun” translates from Chinese as “the beauty of divine beings dancing.”

On the surface, Shen Yun Performing Arts depicts 5,000 years of Chinese culture through original yet traditional dances and music. Audiences see folk and ethnic dances, and short vignettes that tell the legends and history of China through classical Chinese dance. The company is simply sharing its traditional arts.

“I think what they are doing here is a great job and transmitting all that power of tradition,” Mrs. Portis said.

But look deeper, and those 5,000 years of Chinese history tell a more universal story. Despite the uniquely Chinese culture she was seeing, Mrs. Portis felt the performance rang true for all people.

“It’s part of us as humans because I could see elements of different cultural aspects from the world. … Some of the dances and some of the things they were using for the skirts and the colors, … it’s something that you can see, for example, in Mexico. … So there are elements that they share with other cultures. I think that is something within the soul.”

The elements that rang deeply for Mrs. Portis could be called the soul of China, for those 5,000 years of Chinese history tell a story of a culture deeply connected with the divine. Traditionally, the Chinese believed that if people strove to improve themselves morally and led a virtuous life, they would live in harmony with man, with the earth, and with heaven.

The purpose of the ancient Chinese arts, then, was to depict this harmony—this perfect balance between man, nature, and heaven, and to restore for those in the audience the very best qualities of humankind.

As Mr. Portis, a self-employed investor, said, “I think that truth, beauty, and goodness is kind of a universal artistic trait of understanding and evaluating art.”

“This show very much exemplifies truth, beauty, and goodness. And so for us, we are very pleased and enjoyed the show,” he said.

Classical Chinese dance is an apt means for restoring these qualities. Not only is physical perfection the aim of the dancers and musicians, but spiritual perfection as well. Shen Yun performers embrace cultivating their characters toward ever greater moral improvement, so as to embody truth, goodness, and grace in their lives. Through this self-improvement, they hope that their audiences are uplifted.

The company states on its website: “Art was meant to uplift, bringing joy to both the people who created and experienced it. It is this principle that drives Shen Yun performers and their art.”

Certainly the dancing captures both grace and technical precision. “The dancing was fantastic,” Mr. Portis said. “They looked very natural dancing. … Everything was perfect.”

But the perfection is clearly deeper, “I think it was really inspiring,” Mrs. Portis said. “It brings about all the beauty that is from the soul and manifested in the movements, with music, everything. It was wonderful.” she said.

All the More Poignant

The performance was all the more poignant for Mrs. Portis, because, as she explained, the strong message she received from the dancers was that this beautiful tradition, that had its roots in China and had survived there for centuries, can no longer be practiced there. Shen Yun companies are not allowed in China today.

“For them not being able to come back there, it’s … very sad,” she said. “That says a lot about how bad communism is.”

Since the Chinese Communist Party “is officially an atheist regime, it is afraid of the freedom of expression this arts company enjoys in the West,” according to Shen Yun’s website.

The contrast between the beauty and inherent goodness of the traditional performance arts and the denial by the very country in which they arose was very powerful for Mrs. Portis.

“We really recommend it for everybody,” Mrs. Portis said.

With reporting by Catherine Wen and Sharon Kilarski.