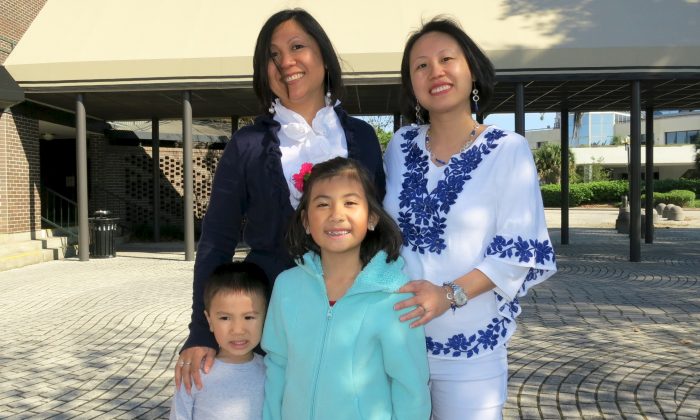 Sisters Alicia Chan (L) and Victoria Chan (R) with their children at the Shen Yun matinee at the Bob Carr Theater in Orlando, Fla., on March 28, 2015. (Sally Sun/Epoch Times)

ORLANDO, Fla.—The Shen Yun performance at the Bob Carr Theater on March 28 moved one family to a sense of pride and gratitude about Chinese civilization.

“It was very good to see the heritage,” said Alicia Chan, director at LegalShield. To her, it was very appropriate that the masters of ceremonies told the audience that Shen Yun cannot be seen in China. “People should know,” she said.

In Ms. Chan’s opinion, the Chinese Communist Party is mistaken when it suppresses the art of Shen Yun. “First of all, I’m Chinese, so I’m very proud,” she said.

She came to the matinee with her sister, husband, and children on a beautiful, clear spring day. They stood in the sun and smiled after the performance. “It’s good to remember and take pride again,” she said of her heritage.

Since the Communist Party is officially an atheist regime, it is afraid of the freedom of expression Shen Yun Performing Arts enjoys in the West, according to the Shen Yun website.

Shen Yun’s productions draw their inspiration from China’s 5,000 years of civilization, according to the program book. Values such as compassion and loyalty, kindness and bravery lie at the heart of traditional Chinese culture, the program reads.

Ms. Chan agreed. She said those values were always at the heart of being Chinese, and when the Communist Party took over the country, it tried to wipe them out. But the ancient values are indelible.

One of the classical Chinese dances that tells a story is The Power of Compassion, which is set in contemporary China. In it, a young man shows kindness to a policeman who has attacked innocent people targeted for their beliefs. In the end, “understanding and sincerity pave the way to an unexpected blessing,” according to the program.

Ms. Chan said such values were always at the heart of being Chinese and wanted her children to know the classical Chinese stories that she had enjoyed as a child. “We brought them here so they could be exposed to the culture,” she said.

Her daughter loved the beautiful dresses and the Monkey King story, which Ms. Chan enjoyed when she was little. With a laugh, she said she remembered Monkey King and Pigsy from movies her mother used to show her. Now she was providing the same cultural foundation to the next generation that her mother had provided for her.

From a purely entertainment perspective, Ms. Chan said: “I think they did an excellent show because they added the pictures in the background. It made people be entertained and surprised,” she said. Shen Yun uses a state-of-the-art digital backdrop, which is remarkable for “extending the stage and transporting the audience to a world where heaven and earth are one,” the Shen Yun website states.