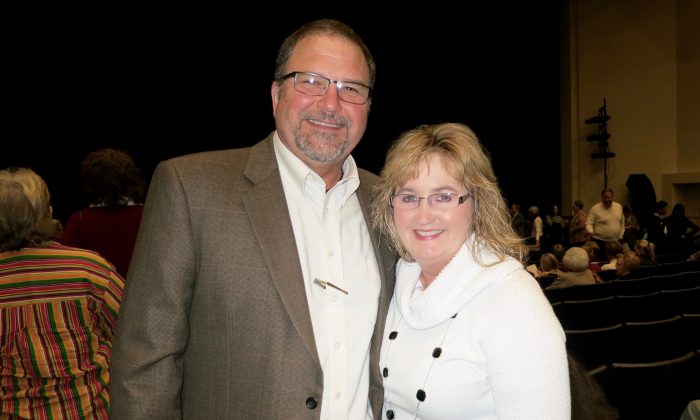 LAKELAND, Fla.— Few performances in today’s society make a person ponder the benefits of slowing down, becoming more introspective, and taking up meditation.

What experience other than a Shen Yun performance—steeped in 5,000 years of ancient Chinese culture—has caused him to consider taking up a peaceful practice of mind and body?

On the evening of Jan. 5, at The Lakeland Center, during a show he described as wonderful, the thought crossed his mind.

Based on his words, his mind was peaceful, clear, and calm as downtown Lakeland’s very own Lake Mirror.

Mr. Boyd, who works in lumber sales, was inspired not just for himself. He felt the whole country could benefit. He said that the United States, a relatively young country, could learn a lot from traditional Chinese culture, as it is a culture that has been tempered and refined over time.

I think the fact they meditate, they spend time introspectively … would go a long way in helping our country.
— Scott Boyd

“I think the fact they meditate, they spend time introspectively thinking about themselves—not everything else—I think that would go a long way in helping our country,” he said.

Mr. Boyd currently spends mornings reading scripture. He centers himself this way. “It is a form of meditation,” he said. “My mother [did] tai-chi for a while, and I would like to get into something like that to where I can work both my body and my mind at the same time.”

The dance that spoke to Mr. Boyd from the stage of the Lakeland Center was classical Chinese dance. Along with the Shen Yun Orchestra’s beautiful blend of musical styles from East and West, dance is the heart of a Shen Yun performance. Part of what makes classical Chinese dance so precious is that it has been passed down over thousands of years—in imperial courts, among the people, and through plays.

“China’s deep cultural traditions are contained in classical Chinese dance, allowing its movements to be richly expressive, such that the personalities and feelings of characters can be portrayed with unparalleled clarity,” the Shen Yun website states.

Mr. Boyd shared the reverence toward the divine that he saw in Shen Yun. “Their desire to know God and heaven—they have a lot of intermixing between Chinese deities and humans. I think that is very important,” he said of the performance.

In traditional Chinese culture, “mortals and divine beings merge on stage as one,” the Shen Yun website says. “Principles such as benevolence and justice, propriety and wisdom, respect for the heavens, and divine retribution, all come to life, washing over the audience. Originating from Confucianism, Buddhism, and Taoism, these ideals are the essence of traditional Chinese culture.”

Mr. Boyd had the fortune of seeing the Shen Yun Performing Arts New York Company portray heavenly realms, ancient legends, and modern tales of heroism. He felt a familiarity with his own faith, as some of the stories portrayed through dance demonstrated the Chinese belief that mankind came from divine origins.

Mr. Boyd shared his appreciation for the deeper things in life. And so for him, on this particular night, Shen Yun was a match made in heaven.