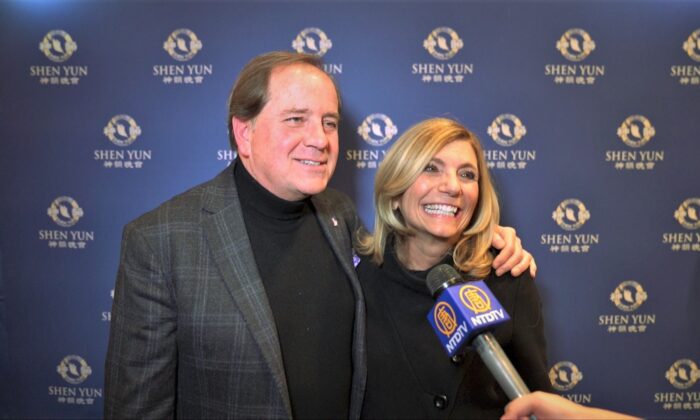 Susan Martinelli Shea, the president and founder of Dancing with the Students, attended Shen Yun Performing Arts on Feb. 22, 2020 with Mark Murphy, an account executive with an international fragrance company. (NTD Television)

PHILADELPHIA—Shen Yun Performing Arts inspired its Philadelphia audience with the grace and beauty of Chinese culture on Feb. 22, 2020, even as it left many lamenting the tragic fate of those traditions in the land where they originated.

Merriam Theater was packed with people to take in the New York-based company’s presentation of true Chinese culture, a performance based on the history, legends, and spiritual foundation of the world’s oldest continuous civilization.

“It was unbelievable. They did moves I’ve never seen,” said Susan Martinelli Shea, the president and founder of Dancing with the Students, a nonprofit 501(c)(3) organization that teaches ballroom dancing, manners, and respect to inner-city students.

“I could not believe the height that the jumps got for the men and the women. It was flawless. It really was,” she said.

“Wonderful,” agreed her date, Mark Murphy, a musician who also works in the fragrance business. “The movement was beautiful and fluid, but also very obviously challenging. And there wasn’t one flaw. Is somebody falling? Please fall. No, they won’t, because they’re inhuman,” he said.

A Performance of Sight and Sound

Shen Yun’s dancers are trained in classical Chinese dance, and also study the folk dances of China’s various ethnicities. Their movements are backed up by a symphony orchestra that includes the addition of ancient Chinese instruments like the erhu and pipa for a sound that is both familiar and unique.

“The orchestra was beautiful, and the music was wonderful, really enjoyed it,” he said.

“It was a little emotional and really beautiful,” added Shea. “It was perfect.”

“I concur fully. It just nice to just witness the culture, this side of the culture,” he said.

Shen Yun’s dancers made an impression on many in the audience with grand leaps, intricate choreography, and the tumbling moves that are distinct to classical Chinese dance.

These jumping and tumbling techniques are more familiar to most people as acrobatics and gymnastics but actually originate in classical Chinese dance.

David Mindich, a professor of journalism at Temple University, was particularly impressed by these movements.

“I thought the leaps were so acrobatic and the dance was beautiful,” he said.

“The human body can do so many miraculous things and it’s very exciting to see all of the flips, the dancing, the storytelling—it’s just very impressive. It’s wonderful,” he said.

A Culture to Revive

Shen Yun tours the world on a mission to revive 5,000 years of divinely inspired Chinese culture, a rich history that has been systematically suppressed in China proper because of the Chinese Communist Party’s attempts to forcibly change the Chinese people. Some 60 million to 80 million Chinese people have died since 1949 due to the regime’s attempts to restructure Chinese society and wipe out traditional beliefs.

“I think in any culture you want to preserve all the traditions because it would be a shame to lose them. If you don’t have performances like this, traditions can die out and the world becomes poorer,” he said.

“I think it evokes a lot of beauty, I think there’s a peaceful quality to it as well,” she said.

“The costumes and the background also were beautiful and how they integrate that into the show was interesting,” she said.

“It’s terrific. I’ve never seen anything quite like it,” said Dutill.

He said Shen Yun conveyed a message that from faith comes beauty.

“It’s tragic that the people of China are kept from experiencing it by the government,” he said.

“It’s apparent that the beauty of the dance comes from something within, it comes from a faith within, it’s something bigger than themselves. And that truth and beauty and goodness are all intertwined, they’re all wrapped together. That’s what they’re expressing from the dance,” he said.

He noted something of the resilience of such people in the performance.

“They’re going to continue to live according to their convictions, notwithstanding of the dangers that it creates,” he said.

His wife, Lora Dutill appreciated the history presented in the performance and lamented the demise of traditional Chinese culture.

“I see how sad that it is that they can’t continue to seek truth and beauty and goodness,” she said.

She summarized the performance as “Grace, purity, goodness, and life.”

“I love the colors, I love the balance between softness and strength, and I think it’s shown in their discipline, their self-discipline, and I would definitely recommend it,” she said.

Shen Yun is playing at Merriam Theater until March 1.

With reporting by NTD Television and Frank Liang.