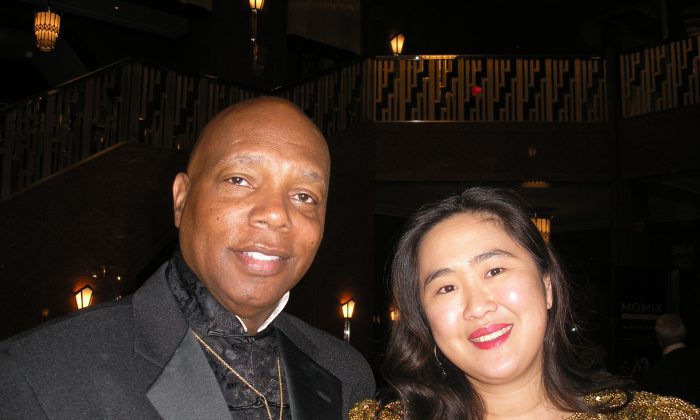 Mr. Cooper created and hosts the Let’s Get Sir-ious About Talk show on KDWN in Las Vegas. He discusses various topics on his show, but mainly focuses on politics.

Mr. Cooper took his wife, Josephine Veloso, to see the performance at the Smith Center for the Performing Arts. This was not his first Shen Yun experience. A few years ago, he attended a Shen Yun performance in Los Angeles, and was compelled to see it this year. “If they [Shen Yun] come back next year, we’ll come again,” said Mr. Cooper with conviction.

“It is inspirational, educational, and it’s inspiring,” said Mr. Cooper, describing the performance.

“Through the universal language of music and dance, Shen Yun weaves a wondrous tapestry of heavenly realms, ancient legends, and modern heroic tales, taking you on a journey through 5,000 years of Chinese culture. Its stunning beauty and tremendous energy leave audiences uplifted and inspired,” according to the Shen Yun website.

China was once known as the “Divine Land,” with the belief that its rich culture was a gift from the heavens. Nonprofit Shen Yun was formed by a group of leading overseas artists in New York with a mission to revive 5,000 years of the divinely inspired Chinese culture that has nearly been lost.

Shen Yun has brought back the best of these traditions, with the world’s foremost classically trained dancers dressed in colorful costumes showcasing stories and legends from Chinese history, a unique live orchestra playing both Eastern and Western instruments, interactive animated background vibrant backdrops, and inspiring singers who use the bel canto technique to sing in Chinese.

Mr. Cooper marveled at each component, and the skills and artistry of the performance. “It was unbelievable,” he said about the athleticism and precision of Shen Yun dancers. He was also amazed by the state-of-the-art backdrops, which allow the performers to appear to fly into the air and perform other superhuman feats from ancient Chinese legends.

Mrs. Veloso added that the combination of vibrant colors inspired her, and gave her “a lot of ideas.”

But Mr. Cooper’s true experience was the spirituality in the traditional Chinese culture. He was particularly moved by the music and the lyrics of the songs. “The music was inspirational,” said Mr. Cooper. “The passages that were in the music, the lyrics in the music, it was all about coming together, about us being together as one being, as opposed to being individuals. I liked that.”

“The song texts the singers perform are original works written for these pieces. Brimming with philosophical reflection about human life and containing deep layers of meaning, the texts go beyond the boundaries of nation, race, and culture, and have been fondly received and appreciated the world over. Some audience members even express that Shen Yun’s vocal pieces are reminiscent of sacred music,” explains the website.

“Extremely spectacular and unexpected,” said Mr. Cooper. “I would recommend, without a doubt, everyone come see this show.”

Shen Yun ‘Makes my heart warm to be Chinese’

A thoughtful friend treated Deanna Masukawa to Shen Yun’s March 3 performance for her birthday. “This birthday gift I will remember forever. We got good seats. I could even see the faces of the people. I had dreamed I would get seats there. It’s a dream come true. My friend really thought about me, and she got me the perfect gift,” said Ms. Masukawa in appreciation of her friend.

After retiring from teaching in California, Ms. Masukawa has served as a substitute teacher in the Clark County School District.

Being of Chinese descent, Ms. Masukawa felt uplifted and proud after taking a journey of 5,000 years of Chinese culture presented in the performance. “I love the performance. It’s just beautiful to see my heritage, and understand why I like what I like,” she said. “It makes my heart warm to be Chinese.”

Ms. Masukawa appreciated the fact that Shen Yun is sharing traditional Chinese culture with the world.

“Millions have seen Shen Yun. Standing ovations at the world’s top venues,royalty attending in Europe, sold-out shows throughout North America, and packed houses across Asia have made Shen Yun an international phenomenon,” states the website.

While enthralled with the performance overall, she was moved by spiritual themes in the lyrics of the songs: “They were beautiful, because they came from the heart.”

Ms. Masukawa marveled at the unity of everyone involved in the performance.

According to the website, there is an inextricable connection between the arts and heaven: “Throughout history, almost every culture looked toward the divine for inspiration.”

“Today, Shen Yun’s artists-dancers, musicians, choreographers, and composers, and the entire team-follow this noble tradition. For them, this spiritual connection is the motivation for striving to excel, is the heart behind each movement of the dancer and each note of the musician. It is why audiences can feel there is something different about Shen Yun,” explains the website.

Ms. Masukawa said, “My friend and I can’t wait for next year. So we’re going to try to sign up early so we can get seats early.”