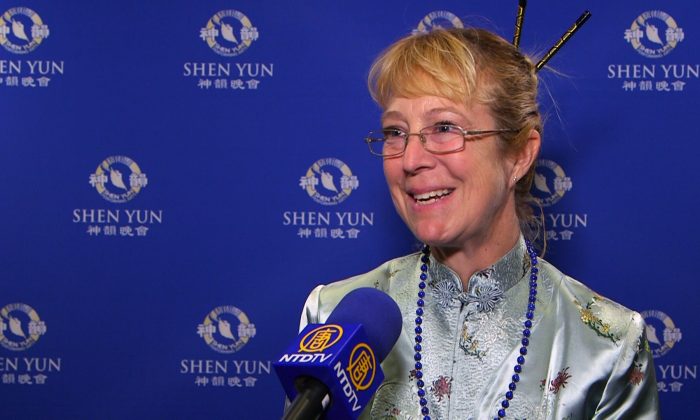 Josie Hirsch, who works with the Simi-Valley Cultural Association, loved the experience of Shen Yun. She saw the March 23 performance at the Fred Kavli Theatre. (NTD Television)

THOUSAND OAKS, Calif.—Shen Yun Performing Arts took to the stage for three unforgettable performances at the Fred Kavli Theatre on March 22 and 23.

Josie Hirsch, who works with the Simi-Valley Cultural Association, loved the experience.

“It was so moving, it was so incredible, so educational,” she said.

What is Shen Yun? Since its founding in 2006, the performing arts company has become the world leader in classical Chinese dance and music, reaching some 20 countries and 100 cities.

Its mission is to bring the traditional, divinely-inspired culture of China back from near extinction and share it with the world.

“To learn about another culture, through their art, their music, and their song and dance, it was just a great way to learn about a different culture,” said Ms. Hirsch.

At the heart of a Shen Yun performance is classical Chinese dance, a richly expressive and elegant art form passed down and refined for thousands of years.

“There were so many inspirational moments,” said Ms. Hirsch. “It was the connection that the Chinese culture has with … divinity and how they show their love and their dedication through the arts.”

An especially unique part of each of Shen Yun’s dance numbers is the intricate and flowing costumes that become part of the dances themselves.

“The costumes were absolutely gorgeous. I want to know where to find them,” Ms. Hirsch said.

She encouraged other people to take a closer look at Shen Yun, or several.

“It is worth coming out to see over and over again,” she said.

A Message of Tolerance

Gita Pimentel, life coach and energy healing teacher, said the Shen Yun performance was “beautiful, fantastic,” but what touched her the most was the message.

Although Shen Yun displays the pinnacle of China’s 5000-year culture, it cannot be shown in China today.

“For thousands of years, Buddhist, Taoist, and other disciplines were at the heart of society,” says the Shen Yun website on Chinese culture. “Calligraphy, music, medicine, attire, and much more were said to have been passed down from the heavens.”

Yet communist rule has nearly destroyed this spiritual core of the nation.

Shen Yun seeks to revive these traditions, as well as address the Communist Party’s destructive actions, such as the persecution of practitioners of the spiritual meditation Falun Gong, also known as Falun Dafa.

Ms. Pimentel is originally from Venezuela, where communism also has taken hold. She said she hoped more people could learn more about the oppression of freedom of belief in China and other places of the world.

And as a meditator since the age of 9, she very much appreciated the spiritual traditions of Chinese culture expressed through Shen Yun’s performance.

“It was so beautiful to see that aspect in the show that I wasn’t expecting,” said Ms. Pimentel. “I recommend everybody to come and see this.”