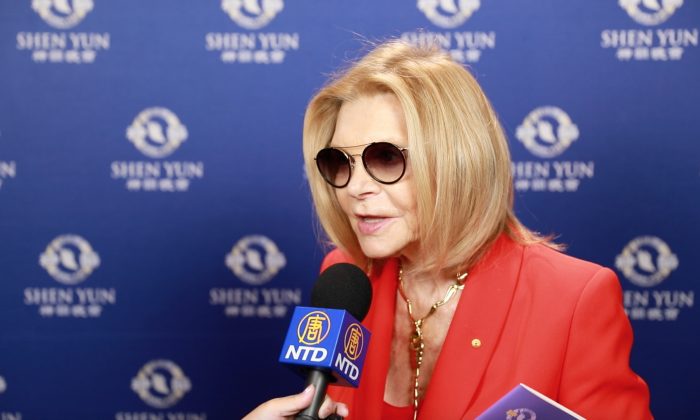 “I’ve been coming for many, many years,” Zampatti said. “I adored it.”

The winner of Australia’s very first businesswoman of the year award in 1980, Carla told NTD Television how watching Shen Yun every year has influenced her beloved clothing line, Carla Zampatti.

“I love the costumes and the color,” Zampatti said. “It kind of influences my ideas of what I want to do for the next collection.”

Zampatti said she particularly appreciated the male dancers, who performed very masculine movements in performances inspired by Mongolian culture as well as ancient culture from the Ming Dynasty.

“It reminds me that I have to get fit and go home and do some exercise,” Zampatti joked. “Incredible, just amazing.”

“I love the comedy pieces … the Monkey pieces,” Zampatti said, referring to the performance that depicted the Monkey King from the Ming Dynasty classic “Journey to the West.”

“They’re fun. There’s a lot of humor, which I think it is very important. [It’s] very engaging,” she said.

Carla also remarked at how Shen Yun’s digital-backdrop helped extend the stories told by the Shen Yun dancers beyond the stage. “I love the disappearing into the sky. I’ve never seen it done so perfectly. It’s very hard to believe that it’s not real.”

She said Shen Yun was an event not to be missed.

“I would describe it as a must do,” she said. “It is very inspiring, very knowledge-giving, and yet uplifting and amusing.”