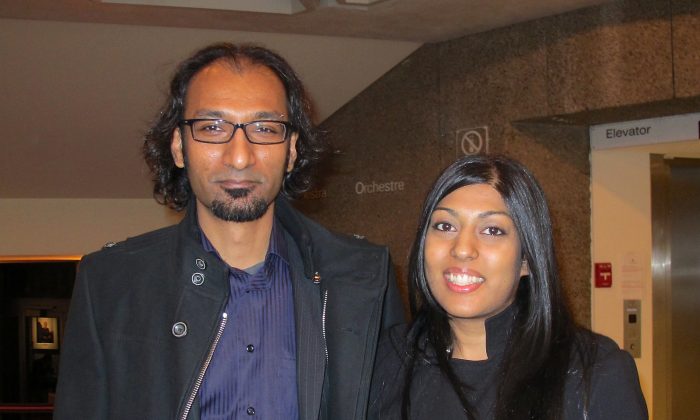 OTTAWA, Canada—“I loved it, it was incredible,” said Venk Prabhu after taking in the Shen Yun Performing Arts show at the National Arts Centre on Saturday afternoon.

“The dance was amazing and also very well choreographed,” said Prabhu, who trained as an architect and is now owner of an organic tea importing company.

According to the Shen Yun website, “For thousands of years, traditional art forms such as music and dance have been integrated into Chinese life, expressing benevolence, beauty, and many other virtues. Shen Yun’s goal is to revive the authentic and original manifestation of traditional Chinese culture and art.

On stage, Shen Yun performances bring back these traditional values that have sustained and created cultural expression for so many generations.”

Shen Yun’s mission is to give audiences a chance to glimpse this wonderful culture through the song, dance, and live orchestral music.

“I was right in the front so I could see them playing and I thought it’s really interesting, the mix of the two types of instruments. I thought that was very nicely done as well,” Prabhu said, describing the original music by the Shen Yun orchestra, which combines philharmonic instruments with traditional Chinese instruments.

He was also highly impressed with the soloists.

“The singing, the soloists, the baritones, the sopranos, the tenors—incredible. I really enjoyed the sound and the intensity of the voices. When the soloists were on I was very focused, very one-on-one. It felt like a little personal concert.”

Prabhu and his wife Priya own Shanti Tea which provides organic teas from around the world. The couple moved to Ottawa so that Prabhu could study naturopathic medicine. Their company also has warehouses in Montreal and Vancouver.

Shen Yun performances depict different legends and aspects of life in ancient China, as well as topics from present-day China.

Prabhu felt that such a variety was well presented. “Just to see the progression and the movements from the present and past, going back and forth in time, and the overall theme, I think it did really well,” he said.

“It has this one story with the Confucius and the teachings. Another story about Falun Dafa. All of these different ideas are coming together about mutual respect and understanding. And also the communication through arts.”

“[The emcees] were talking about the Tang Dynasty being the golden age of China, where the artists and poets, everyone came out—I think that was very well conveyed by the show. I think it was that golden age that came out on stage, where I felt it was really inspiring, definitely,” said Prabhu.

Reporting by Donna He and Pamela McLennan