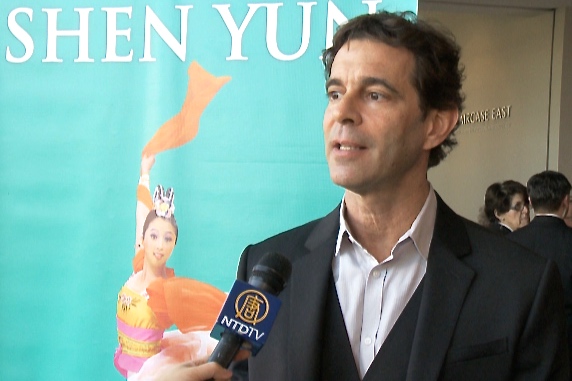 Jorge Kittl at the Long Center for Performing Arts in Austin on Dec. 28, 2014. (Courtesy of NTD Television)

AUSTIN, Texas—Jorge Kittl, a vice president with Samsung based in Austin, was pleased to have attended Shen Yun Performing Arts after seeing the New York-based classical Chinese dance and music company perform at Austin’s Long Center for Performing Arts on Dec. 28.

“It’s the first time I have seen it. I was quite impressed,” Mr. Kittl said.

He said the colors in the performance particularly stood out for him.

“Every costume in a Shen Yun performance is presented with brilliant colors, displaying a splendid spectacle,” explains the Shen Yun website.

“From the Tang Dynasty’s ‘Raiment of Rainbows and Feathers’ to imperial dragon robes, phoenix coronets, and cloud capes; from the civil official’s headdress and robes to the warrior’s helmet and armor; and from the traditional rightward cross-collared Han clothing to the ethnic attire of the Manchurian, Tibetan, Dai, Mongol, and Uyghur ethnic groups.”

“I think it was very, very colorful,” said Mr. Kittl

Adding to the visual spectacle on stage are the animated digital backdrops, which portray scenes from heavenly realms and beautiful Chinese landscapes.

“That was very nice, I enjoyed that.”

The music was another element that stood out for Mr. Kittl, both the combination of classical Western and Chinese instruments, and the fact that the orchestra played original compositions.

He noted that Shen Yun and its presentation of traditional Chinese history and culture will help him better understand the Chinese people and their culture.

One piece that Mr. Kittle particularly took note of was about the persecution of the spiritual practice of Falun Gong by the Chinese regime in modern-day China, and the faith and peaceful resistance of the Falun Gong practitioners.

The story-based dance portrayed the compassion of the practitioners and how it touched the heart of one of their persecutors, resulting in the persecutor regretting his actions.

“They changed the mind of the person that was persecuting them,” Mr. Kittl said. “That was very moving,” he added.

“Overall I think it was quite nice,” Mr. Kittl said of the show, adding that he would recommend it to his friends.