'Most spectacular show I've ever seen' 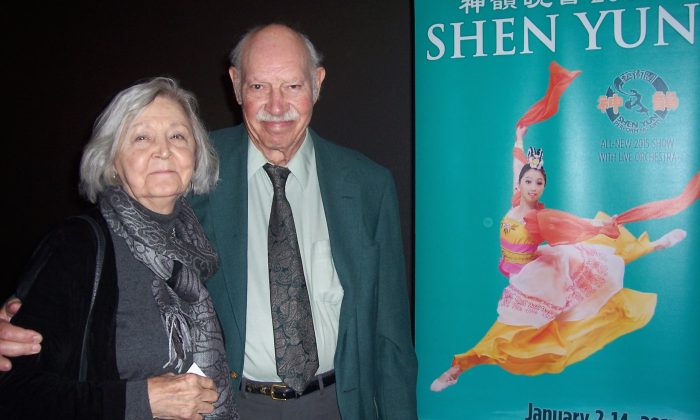 Ray Oliver and Valerie Robinson were very impressed by the performance of Shen Yun Performing Arts they saw in Sacramento, on Jan. 14, 2015. (Gary Wang/Epoch Times)

SACRAMENTO, Calif.—Few shows can evoke praise like, “the most spectacular show I’ve ever seen,” from a man of the arts, but that is exactly the way Ray Oliver described Shen Yun’s finale performance Wednesday night, Jan. 14, at the Sacramento Community Center Theater.

“I was very much impressed, I really was. It was incredible,” said the artist.

Ray Oliver is known for his masterful works of realistic painting, a style of painting where the artist tries to represent the subject matter in as true to life form as possible, with little embellishment or fantasy.

Accompanying Mr. Oliver that evening was his companion, Valerie Robinson, a retired registered nurse. The visually-coordinated pair—Mr. Oliver in a smart teal blue blazer and Ms. Robinson wearing an exquisite silver scarf—made their way out of the grand auditorium looking both dazzled and inspired.

“The [animated backdrop] blew me away. I’ve never seen anything like it,” said Ms. Robinson. Mr. Oliver concurred, adding that he thought it was unbelievable.

As the website explains, Shen Yun’s animated backdrops bring far away lands and heavenly worlds to life on stage. In one moment a Tang Dynasty imperial palace can become a deep underwater kingdom where man and creature collide.

Ms. Robinson is referring to the stories behind each dance. As Shen Yun website explains, Shen Yun’s mini-drama pieces draw upon stories and legends that span China’s history … In less than ten minutes each, Shen Yun dances recount ancient myths, bygone heroes, or celestial paradises. Whether set in the past or in contemporary China, every dance embodies traditional Chinese values.

The performance was more than Ms. Robinson could describe in words: “I think it’s something you’d almost have to see to appreciate because there’s so much movement and dance and color and the costumes. It’s not something you can really explain.”