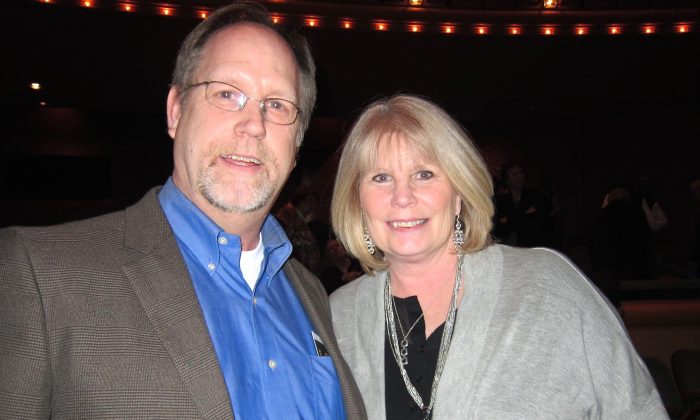 CINCINNATI—Not knowing what to expect, when one comes to see the premier Chinese dance and music company Shen Yun Performing Arts perform, is a common sentiment among audience members everywhere. This trend continued on Feb. 28 at the Aronoff Center for the Arts.

“It’s pretty neat,” said Art Schaller, president of National Flag Company, a family and local business. “I didn’t know what to expect, but it keeps your interest, and it’s very colorful.”

Mr. Schaller and his wife, Cindy, attended the performance to have a cultural experience in celebration of their 30th anniversary this weekend. They found it to be very interesting.

Shen Yun’s mission is to revive this divinely-inspired culture which was almost completely destroyed by the communist party’s policies, particularly the Cultural Revolution.

“Through the universal language of music and dance, Shen Yun weaves a wondrous tapestry of heavenly realms, ancient legends, and modern heroic tales, taking you on a journey through 5,000 years of Chinese culture,” states the company website.

“I’m impressed with the colors, costuming, and the way they use there costumes,” said Mrs. Schaller. She was referring to such effects as the dancers’ very long dress sleeves becoming part of the performance.

“Every costume in a Shen Yun performance is presented with brilliant colors, displaying a splendid spectacle—from the Tang Dynasty’s “Raiment of Rainbows and Feathers” to imperial dragon robes, phoenix coronets … to the ethnic attire of the Manchurian, Tibetan, Dai, Mongol, and Uyghur ethnic groups,” according to Shen Yun’s website.

What also caught her attention were the special effects of the animated digital backdrops for each of the 20-some mini-dance and music dramas.

“The special effects in the background—the way they interact with the stage was pretty interesting, unexpected, kind of cool. It just looks like the background and then all of a sudden becomes a part of the show,” she said.

Something that surprised Mrs. Schaller was the unexpected calming effect of the performance. “It’s just relaxing, don’t know why it would be relaxing seeing someone up there being so energetic and all that,” she said.

Lisa Flake, executive assistant for Quantum Metals, also wasn’t sure what to expect. Her husband, Rick, bought the tickets as her Christmas gift.

“I loved the dancing part and the live orchestra in the pit,” said Mrs. Flake. She was intent on focusing on the actors to the point of ignoring the backdrops. “There is so much in it when you are watching a [dance performance], that’s all that you see is the music and the dancers. And I love that—the pageantry of it,” she said.

There is much to take in, as Mrs. Flake noted, as classical Chinese dance has a history of thousands of years. “Soaking up profound wisdom from every era and dynasty, it has become a complete system of dance embodying traditional aesthetic principles with its unique dance movements, rhythms, and inner meaning,” according to the company’s website.

One the the things that stood out to her as being a unique aspect of the dancing was “just the way that they hold their hands, move across the floor almost like they are floating seamlessly across the floor,” she said.