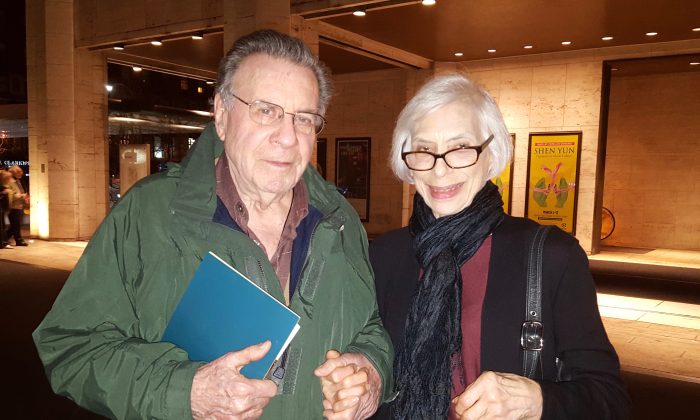 It was one night of music and dance that aimed to bring 5,000 years of the authentic, divinely inspired traditional Chinese culture to life. Mr. Tapp and his wife Judy Wallach, a psychologist, attended a performance at Lincoln Center on March 9, 2016.

As a scholar of comparative religions, Mr. Tapp zeroed in on the dances addressing Falun Gong, a spiritual mediation practice that originated in China. Under communist rule, such faiths have been outlawed and at some point in time persecuted by the regime. The persecution of Falun Gong continues today, as audience members learned in two of the dances.

The awareness is important, Mr. Tapp said, especially since China seems unwilling to change. “It’s a tough one,” he said.

The New York-based company was formed by artists who came from China, and around the world, to share the lost culture with the world. The traditional Chinese culture centered on the idea of harmony between heaven, earth, and humankind. It drew from the religions of Buddhism, Taoism, and Confucianism.

It is more spiritual than religious, Mr. Tapp observed. The world today is no longer spiritual, he added, but there are values shown like justice and spirit and compassion that are still relevant and are of value to many.

“I think we’re all alone on this earth and it’s not a very nice place, and we try to make it better for everybody including ourselves,” he said. “Heaven is very useful for me.”

Ms. Wallach, an honorary trustee and formerly the first woman president of New York Society for Ethical Culture, said she would leave the religion to her husband, but had much to say about the artistry.

“The art is lovely and should certainly be kept intact, and people should have the opportunity to experience it,” Ms. Wallach said.

“It was technically unbelievable, and imaginatively superb,” Ms. Wallach said of the staging of the production. The digital backdrop deserved its own mention, as the way the dancers interacted with it—jumping in and out of scenes, to the moon and back—was ingenious in their movements.

The couple enjoyed the mix of Chinese instruments in the orchestra, and appreciated the opportunity to hear a solo. Erhu virtuoso Xiaochun Qi played the two-stringed instrument to such an effect that the audience was amazed.

“It’s amazing that it can do so much with just two strings,” Ms. Wallach said, as her husband commented on the range.

“I felt transported!” she said.