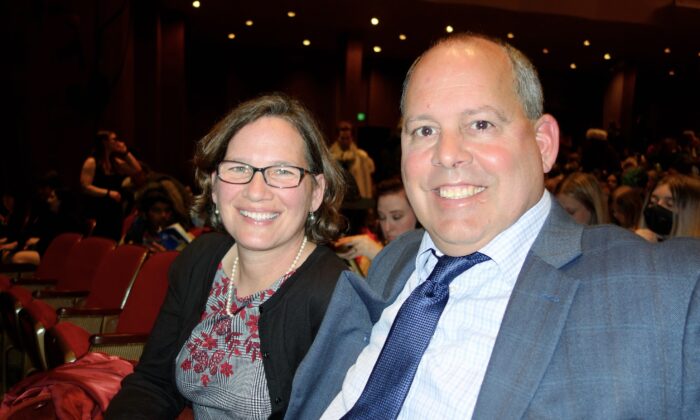 PORTLAND, Ore.—People thrive when they are in a community and when there is hope. This evening, Shen Yun Performing Arts concluded its final performance in Portland, spreading the idea of goodness and hope.

“I think there’s a message of … strength and beauty, doing good, working with other people even as things go badly, that’s one of the messages. I think one of the big messages is there is hope, and something, a power higher than us is probably one of the big ones that comes up,” said Shaun Craig, vice president of R&D.

With the gradual loosening of restrictions from the pandemic, more people are willing to step out and experience live performances. Shen Yun‘s message of hope is a good reminder that life isn’t just what’s happening at the present.

“I think it gives people hope that there’s something out there more than just what’s happening now. Life will continue to go on, in spite of the hardships now,” said Sheila Craig, a nurse.

Shen Yun is based in New York and although its mission is to present the beauty of ancient, traditional China to the world, Shen Yun is unable to perform in China.

“It’s a shame you can’t see this in China, which is part of their history,” said Mr. Craig.

Kathy Holeman, an artist, was also in the audience for this matinee.

She was impacted by a scene in the performance that made her think of her spiritual connection to the divine.

“I really like the beginning when [we were] asked who would go to earth. I think that was very impactful for me because it emphasizes our connection to spirit and also nature when they come down. So yes that part was probably the most impactful,” Ms. Holeman said.

The scenes of the heavens and traveling through different dimensions is part of Shen Yun’s patented digital backdrop. The technology allows audiences to be transported through time without the use of bulky stage props.

“I love the projection from behind—how people move back and forth, it makes the performance seem that much bigger,” she commented.

Being an artist who feels a strong connection with nature, Ms. Holeman shared that Shen Yun gave people hope of connecting with their past and with nature.

“I think it does give us hope that we can improve where we are now. I think that our culture needs to reclaim some of the spiritual principles that we have had in the past and our connection to nature specifically. I’m a big lover of nature, I show that in my art and that is a big part of it and so it does give me hope for that. We need to see more things like this.”

As an artist, she shared that Shen Yun has inspired her art “in the bright colors because in nature there’s a lot of bright colors. That is something I need to add more in my art. I do a lot of animals and wildlife art.”