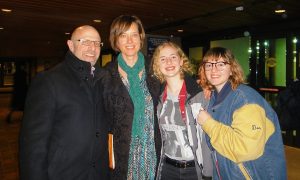 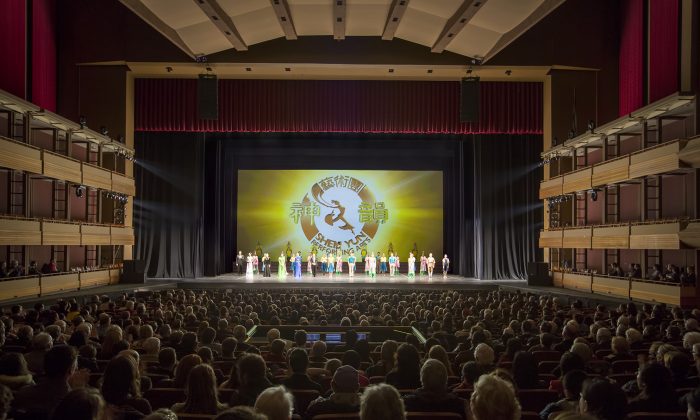 The cast of Shen Yun Performing Arts takes a curtain call at Centre In The Square in Kitchener on Dec. 29, 2014. (Evan Ning/Epoch Times)
Company

KITCHENER, Canada—Investment adviser Stephen Polonoski had seen Shen Yun Performing Arts before, and he was sure his fiancée would like the renowned classical Chinese dance production, so he brought her to see the show at Centre In The Square on Dec. 29, the show’s opening night in Kitchener.

“I wanted to take her to it because I liked it before. I thought she might like the costumes, the dance, all of that,” said Mr. Polonoski, vice president and assistant branch manager at Richardson GMP.

“He got me the tickets and I love it—I really love it,” said Janeth Jakqueline Aranda Mejia, a fashion designer and the CEO of JCK1 Clothing, her own brand based in Lima, Peru.

“It’s very beautiful, colourful, and cultural. It also explains a lot about China and dance, the art. It’s very gorgeous. We love it,” she said.

“This is my second time to see the show but it’s a little bit different than last time. But I like the culture as well and the history, and the costumes are beautiful. The music’s nice too—very relaxing,” said Mr. Polonoski

Based in New York, Shen Yun was founded in 2006 to revive China’s traditional culture through the performing arts. Each season, the designers make hundreds of intricate costumes similar to the attire worn in different dynasties and by different ethnic groups in China.

“I think it’s very beautiful and I like the textiles in the show. It looks very luxurious and looks very original too,” said Ms. Mejia. She started to list some of the aspects that were of particular interest to her, such as “the textiles, the silk, the golden ….”

“She’s going to get some ideas from the costumes,” Mr. Polonoski said, laughing.

Shen Yun’s mission is to revive China’s authentic traditional arts and culture, which valued spiritual pursuits and emphasized morality and righteousness as the basis for society. This is the essence of traditional Chinese culture, based on the ideals of Confucianism, Buddhism, and Daoism, as explained on the Shen Yun website.

This aspect wasn’t lost on Ms. Mejia, who noted that the dance story titled The Power of Compassion stood out for her.

“It shows a lot of values, moral values. Actually, Chinese people are very well known for that, because they have a lot of values in their culture,” she said.