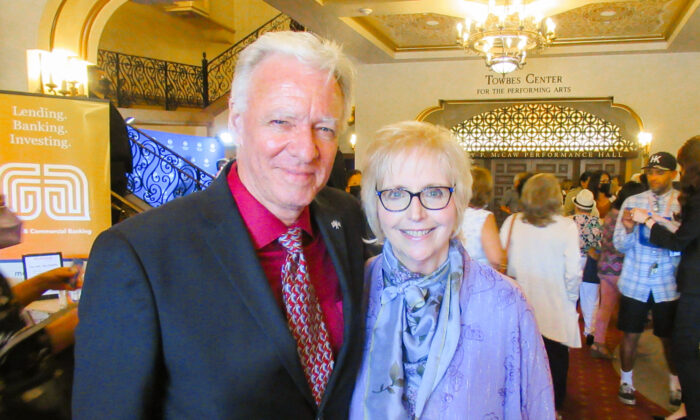 SANTA BARBARA, Calif.—Shen Yun Performing Arts, the world’s foremost traditional Chinese classical dance and music company, brought beauty and compassion to the evening performance at The Granada Theatre on May, 29.

The company, which is restoring China’s ancient culture, is entertaining and educating its audiences with story-based dances that depict the Middle Kingdom’s divine culture which was passed down to earthly mortals by heavenly deities.

Karen Fox and Simon Fox, who have a non-profit agency Adventure in Caring, connected to the values in Shen Yun. Mr. Fox said his agency was all about compassion.

“I loved the whole aspect of how compassion is so important and that we come together as human beings and to me, love is so important. That’s the healer of all things because you can’t have love and hate at the same time. So when you help to encourage compassion which brings the heart, the love, it dispels the darkness,” she said.

She was stunned by the beauty of the heavenly scenes in Shen Yun’s dances. “[I] absolutely loved it.”

Shen Yun’s backdrops, with the help of its 3D technology, create a magical illusion for the audience. They were also amazing, said Mrs. Fox. “Then dancers all disappear, you see them all fly up into the heavens. I kept saying to my husband, look look, they’re flying,” she said.

The dance “Blue Heaven” which depicts the majestic blue phoenix which can transform into heavenly maidens, was “exquisite,” she said.

“I love that [Shen Yun] breathes spirituality,” said Mr. Fox. “It’s so much more than [a] performance. It’s got a real spiritual core to it that speaks to all faiths.”

There was a message “to infuse everything we do with great beauty and grace,” said Mr. Fox.

“It’s been a while since we went to a live orchestra and it was outstanding,” he said.

The couple concurred that Shen Yun had arrived at a crucial time.

“It should be shown in universities because you know our universities are so infiltrated by communism. It would help them to wake up, to become more aware of what is truth, what is real and what is fake,” said Mrs. Fox.

Both Mrs. Fox and her husband believe that traditions play an important role.

“The only thing that could overcome [the] chaos, is the restoration of some order and tradition really helps with that,” said Mr. Fox.

“[Shen Yun] is going stay with me for a while as an inspiration. It will have a lasting impact. The beauty and grace of it are truly memorable,” he concluded.

“It was absolutely visually stunning and beautiful and the music was great,” said Ms. Wynn.

It was both an interesting and fun way for her to learn about China’s ancient culture.

“It was a new way to tell history,” she said. “I think it’s incredibly important to share perspectives from different cultures in different parts of the world. That helps us to identify with them and relate better and understand their history.”

She was also impressed with how Shen Yun was able to tell its stories in an impartial way. There was no animosity towards the communist regime, she said.

“They just told their side of their story without reflecting the negativity of what they experienced in their faith. So that was a very peaceful way to say it,” said Ms. Wynn.
“[The dance] was very well choreographed. And you could see the systematic training [in the dancing].”

Chinese traditional culture reflects the harmonious relationship between tradition and the divine.

“I like it when you have a tradition, and you’re linking it to the God that you love,” she said.

The last piece in the repertoire [“The Display of Great Compassion”] was the culmination of Shen Yun’s message, said Ms. Wynn. It explained what the performers wished to achieve and their love for and desire to serve their faith, she added.